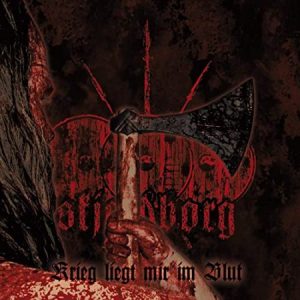 When I first started writing reviews for the site, one album I had the privilege of writing a review for was the debut from Skjaldborg. “Todgeweiht” still holds up 7 years (!) later and still gets many a listen to by me. Recently the announcement of a follow-up album finally arrived entitled “Krieg Liegt Mir Im Blut” (“War Is In My Blood”) which has been released on digital platforms as of January 12th with an independent CD coming out in February. I’m sure the question of why the long delay between releases may be on your mind but for now let’s just enjoy another epic album. Main man Virus has taken what he started on “Todgeweiht” (“Consecrated To Death”) and made what definitely seems to be a progression without changing the original style/sound within the 37 minutes of tunes and 10 tracks. What makes Skjaldborg great and eludes many projects is any instantly recognizable sound which is hard to describe but has a very melodic, catchy and heavy feel and still feels natural for the most part even with what I perceive are many programmed aspects. The one exception is the live drums which are relentless. I would maybe say classic Satyricon (albums from “Nemesis Divina” and earlier) is the first act that comes to mind with a more contemporary style…….absolutely crushing. I could even say some combination of Varg and Mithotyn could work too. The lyrics are in German which Virus really drives home with an intense delivery with some layered parts throughout and I would say overall this album is heavier than “Todgeweiht”. This might be the only slight criticism…the songs may not be as catchy, but I am reviewing while listening on Spotify which is not as convenient as having the actual album for review. A few new wrinkles appear in the form of some more noticeable choral vocals, some slower/moodier parts and maybe some folky touches. However, the overall vibe is still of battle/war metal and after translating some of the titles I suspect there is a main theme to it but not 100% sure. After repeated listens I have grown to like it more and more and once I get my hands on a more conveniently listenable copy, I’m sure I will like it that much better.  Sonically, the tracks have a smooth sound with a little bit of a veiled aspect….not crystal clear but gives it a little more texture and does give it an old school sound. I feel that “Todgeweiht” still holds it spot as my favorite release of the 2 but over time I’m sure “Kreig….” will be standing alongside it as equally as epic a release. Great album.