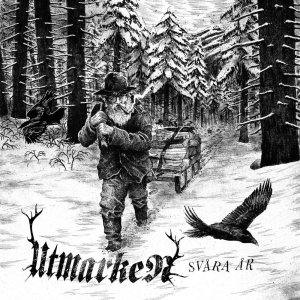 We can all say that 2020 was pretty disastrous and hopefully 2021 will be much better. Once my end of the year lists were completed it was time to make a list of my most anticipated releases for 2021. In the forefront was the 3rd album from Sweden’s Utmarken. Entitled ”Svåra År” (“Hard Times”) the new album features a total of 11 tracks with 4 already being previously released as singles (“Livets Stav”, “Jaktmarker” ,“Hedningablod” and the title track) so 7 new ones totaling about 46 minutes of tunes. The release date is officially February, but I could not wait to start writing a review in January for what will be my album of the year unless something dethrones it. What? Already? Yep, it’s that good. There has not been a single misstep with Utmarken and they are even better than ever. While our scoring system usually gives a pretty much perfect album a 10, I would give this a 10+ no question about it. So why is it so good? Let us start with founder, vocalist and nyckelharpist Mathias Gyllengahm. I am going to say he may be the best vocalist in all of folk metal and maybe in all of metal. Period. His soaring baritone/tenor/whatever it is has a control/sustain/maturity that can’t be described or duplicated…..and sorry but being an American I am mesmerized by those rolling “R”’s in the Swedish lyrics. The nyckelharpa (keyed fiddle) is still another amazingly underutilized instrument in the genre and has a major impact throughout, but I would say less so on this release than on the previous 2 albums or in his other project Norrsinnt. The tracks here are just more memorable and catchy with riffs and harmonies that will stick in your head. The final factor to me is the stability of an amazing band and I have to say I have really not given them their due up to this point. I really have thought of Utmarken as a Mathias semi-solo project with role players. Guitarists Jörgen Wikberg and Janne Asplund, Bassist Robert Jonsson and Drummer Christopher Weidersjö shine brightly here and have really made Utmarken a complete band in my mind now. From a reviewer point of view, most of the time you are obligated to listen to albums because you have to…..this album I estimated I have listened to well over 40 times and each time not because I have to but because I want to. What more can I say? This is an absolute classic and has made 2021 much better already because of it.