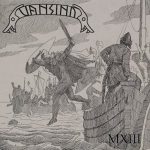 Vansind is a Danish Folk Metal band out of Denmark which had been established in 2019 and has so far only released a strong single “Valborgsnat” in 2020.
On the 26.03.2021 Vansind will release their first EP “MXIII” which title refers to the year of the Danish king Svend Tveskæg and his looting of England in 1013 and the events followed with his death. The seven-headed ambitious newcomer is presenting us on MXIII three new songs with a lot of attention to detail of their elaborated compositons. The EP hits off with the title “Fra Fremmed Kyst” which comes along with very nice pumping melodic guitar riff and a perfect symbiosis of deep growls and female vocals. As I mentioned Vansind is putting a lot of efforts into the details, the growls are underlined in the background by female chants, which is creating a even more atmospheric harmony. The traditional folk instruments do not play such a big role in this first track and the flute is only supporting wisely the song during some episodes. The second song “Den Farefulde Færd” comes very epic, mainly achieved from very strong melodic guitar riffs, the interplay of the growls and the clean female vocals and very little underlaying keyboard supports. The sound of waves at the shores are preparing the way to the third and last track “Gæstebudet” of this EP. Acoustic guitars and flutes are making this song most properly the most folky one of this release. Again a lot of detail in respect of creating the right mood for the title. In adding a short break to the metal part within the middle of the song, the accustic guitars and female chants are taking the lead in creating a even more mystical atmosphere. Overall it is to say that all members of Vansind understand their craft and are professional musicans. The lyrics are kept in Danish and are inviting you to a journey back into the time of the “Vikings”. Maybe nothing new, but very well done. The only downside of the EP is that it is coming with three songs and a playing of 16 minutes quite short. After listening to this release over and over again at the end it simple leaves a taste for more. I am quite sure that Vansind will go its way and will become soon a constant part of the Danish Folk/Viking Metal scene along with bands as Svartsort, Vanir and others. In the end MXIII is a very solid release which simply comes too short.