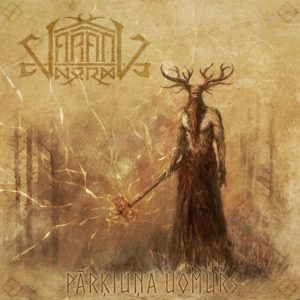 The opening sounds of an battle in a thunderstorm, the signal of the war horns underlined by an epic symphonic melody​ can only mean that the Latvian Viking Folk Metal band​ Varang Nord is back after 4 years with a brand new album called “Pārķiuņa Uomur”. Last year we already got praised with strong releases of Romuvos, Ukanose and Juodvarnis out of Lithuania and this year Varang Nord out of the cold woodlands of Latvia is showing us that the Folk Metal Scene in the Baltic Countries should not be underestimated. Packed with an accordian, bagpipes,Talharpa​ and all necessary metal instruments the Wacken Battle Winner 2019​ is inviting us on their fourth album​ to an epic journey through mighty battles, blood sacrifices to the Old Gods and joyful northern feasts. The lyrics are kept this time in Latgalian, an eastern Latvian dialect. Deep growls are mixed with clear female vocals and also chants/shouts are used to underline the atmospheres of the songs. In respect of the music it is to say that the band is using all their possibilities in order to create epic soundscapes with​ very powerful harmonies inviting you​ to​ a​ nearly cinematic voyage through Pagan Beliefs and the Norsemen lifes.The album offers a lot varity in respect of the arrangements​ of the songs starting from mid-tempo tracks​ as “Stuojīs!”,melodic-death metal attempts in “Pārķiuņa Uomurs”,long accustic parts in “Uperiešona” up to nearly “Finntroll-like black metal blastbeats”​ in “Trolls”. In “Svietņeica” the clear female vocals are taking over the lead​ with some limited support of the harsh male growls, which is giving the title a very unique touch and totally fits into the diversity of the album. No matter in which style Varang Nord is​ arranging their songs you simply can not get more Epic Folk Metal into them, if slow, if fast, it does not matter, every song stands for itself and is arranged with a lot of passion into the deepest detail. Varang Nord understands how to give the folk instruments such as the accordion (mainly,but not only) enough room to create​ very folky melodies and harmonies combined​ with​ heavy guitar riffs, great​ drums performances and strong vocals. The album is coming with 11 tracks including the Intro and the Outro with​ a playing time of 48 minutes and shows​ no weakness at all. In my opinion​ the most mature and so far strongest​ release of Varang Nord.​ ​​