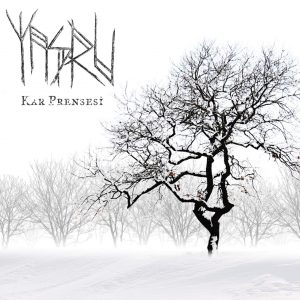 While the album certainly shows some promise, Kar Prensesi is marred by interludes of serenity and atmospheric embellishments that make the album fall just short of making effective use of all the good material presented. Because this album has fewer songs, this review will be track by track, in order to best illustrate all the good as well as the bad.

The album opener strikes one as quite upbeat and epic for Doom, and it reemphasizes that there are other influences at play in this release. There is a good pace, a rhythm one can headbang to, and some very interesting notes of folk instrumentation that merely embellishes the atmosphere, which is also set by some of your typical eerie choral sensibilities. But the song has some fairly muted guitar sections, and when the term muted is used here, it is used over more colorful terms that might be insulting because the music itself is good enough on its own and doesn’t let the mind wander as some atmospheric or drone metal tends to do. The issue is just the lack of bite in otherwise great music with interesting embellishments.

“Uzak Karanlik” begins with equally mellow acoustic work and orchestrations heavily reminiscent of some of the keyboard laments one would hear in the background of some circles of Black Metal. The intro quickly takes on a more grim tone when the evil sounding vocals kick in, and as a result the track’s more intensive guitar riffs, while not dominant, still make impact. All the atmospheric chorals are fleshed out here, presumably because of the songs tone, which shows how much care went into writing the song.

Following that gem is the obligatory instrumental, which is about as frosty and desolate as the cover art. Desolation here, is the extremity of the chilling effect the acoustic number has, which is the highest praise since it could be pulled off without relying much on the background effects present throughout the album, shows again, this band knows what they’re doing.

After the instrumental, there’s another well-crafted, track entitled, “Kar Prensesi”. This one relies on a full vocal range from chants to growls and intricate webs of complimentary instruments. Before the vocal switch from clean singing to growls, there’s even a wind instrument melody that is promptly echoed by complimentary keyboard section. With this track one finds the other big redemption of this album: it is like listening to a well-made symphony at times. Even if one doesn’t enjoy the specific style one has to acknowledge the songwriting.

“Kutsal Saygi” is written in the same vein to the opener but features an emphasis on the noodling virtuosic melodies over the riffing, which, while an interesting changeup, doesn’t make for the tamer sound. And when the melody loops, it becomes an issue given the dynamic nature of the rest of the album.

Closing off the album is a seven minute epic that rolls all of the good from the album into one bundle, keyboards, the atmospherics, the interactions between sections, the whole lot. Where the issue comes in is when the instruments fade for various vocal sections and when the repeating intro section has more or less the same guitar riffs despite the great musicianship it showcases. But this is arguably one of the better songs the album has to offer, simply because it is a solid track, even though the guitar work feels lukewarm considering where the bar has been set.

Ultimately, Kar Prensesi comes down to taste. They are indisputably talent and skill in many regards, including the usually great bonus of not adhering to a play-by-play formula. However, a lot of the well-written musical interactions between instruments and even the emphasis on atmosphere will make it an acquired taste. Regardless, this is exactly the sort of music Metal fans would want to use to convert their Prog Rock friends into Folk Metal fans and is an excellent way to wean neophytes into the genre if they’re used to more ambient or atmospheric styles of Metal or other music. Don’t overlook this album even if you think the lack of heaviness or upbeat folk isn’t to taste. Listening to this album is an interesting experience and should be done even if just to see what else is lurking at the edges of Folk metal.