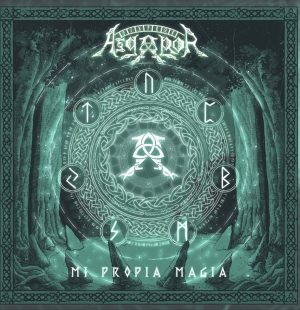 The Folk Metal Band Asgaror already had been founded in the year 2014 in Culiacán (Mexico) and just released on the 05.02.2021 their Deput EP called “Mi Propia Magia”. The seven-headed members of Asgaror are combining the genres of Folk Metal and Power Metal in the tradition of Mago de Oz out of Spain. They also received a lot of attention taking part of the “Saurom Cover Contest” in which they interpreted the Saurom song “Amanencer” and won with the same the first place. The EP starts with the title track “Mi Propia Magia” and you are getting what you expect. Very happy folk vibes with flutes are opening the first track, which comes very heroic with a lot of interplays between the folk elements and the heavy metal riffs. The vocals are kept clean and the attention lays on a very high singing performance and is only partly supported by clean male choirs. The song comes with a lot of tempo-changes and gives enough space for all instruments to unfold. The second song “Invicto” is coming faster and much more attention is given to the keyboard arrangements and power metal riffs/solos. However the song does more come as a symphonic power metal composition, then a folk metal track. With the third song “Sin mi” I get the impression that Asgaror really wants to show with this EP all facets or styles of the band. “Sin Mi” is a very slow and nice metal ballad and accompanied by a very melodic piano harmony and flutes. The last track of this EP “En el mas ella” continues in the style were the first track ended. You receive a very nice epic folk/power metal track, which is for me the strongest one of this release. As recap I would say that Asgaror is on the right track, I personally liked the very much the folk driven tracks “Mi Propia Magia” and “En el mas ella” and also need to underline that the vocal skills from Criss Mesa are really outstanding over the whole album. There is a lot of potential in Asgaror and with the release of this EP they did the first step into the right direction.