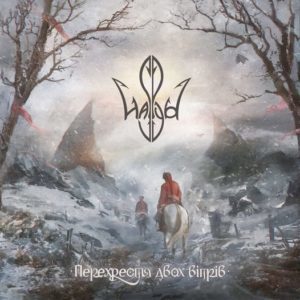 In the continuing trend of bands returning after long layoffs, Ukraine’s Haspyd have issued their 2nd full length album after a 4+year hiatus. The latest offering “Перехрестя Двох Вітрів” (“Crossroads Of Two Winds”) was issued in 2020 featuring 9 tracks totaling almost 51 minutes of music. So, if you have done some quick math, 2016 was the last release (single “Цареград” (“Carehrad”) before the new album. After 4-5 years or so how have they changed? Not much from what I can tell which is good since I think they have a pretty unique sound. Delving into the new album they have stayed with the same style/sound they established on previous efforts. Comparatively they have a very similar vibe to a mash up of Ensiferum and Amorphis with a touch of Grimner and Wartha. I would say they are maybe a little more guitar driven on this album with folk instrumentation specifically sopilka (Ukrainian flute) being in less abundance but still present. In previous reviews of Ukrainian acts (Gjallarhorn and Paganland come to mind) I have commented on how distinct and different they are from each other and Haspyd also has that same “doesn’t sound like anyone else” feel to them even though the influences are apparent at least to my ears. The lyrics are in Ukranian including closing track and cover of Hypocrisy’s “Global Domination”. Biggest highlight? Undoubtedly for me is “Тонка Протока” (“Thin Strait”) with Chur on guesting vocals. Overall, the album is solid but I would say there isn’t anything that really jumps out at you. A solid production makes for an enjoyable listen and a nice return to form for Haspyd.