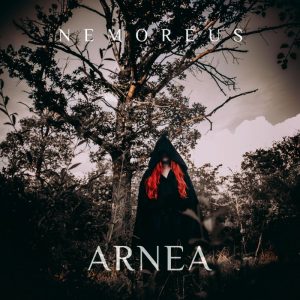 Without a doubt, when I think of Austria the first act that comes to mind is Summoning. With the release of their full-length debut “Arnea”, Nemoreus could be another one. Formed in 2017, this 6 piece from Vienna have put together 12 tracks totaling about 44 minutes for your listening pleasure. The release date appears to be March 5th independently on Bandcamp. First off, these are all brand new tracks and not ones “borrowed” from their previous demo and EP “Silent Watcher” from 2018. I also appreciate that we got the EP to listen to as well as the album for review purposes and to see how they have progressed….and progressed they have. There have been at least 3 singles from the album released thus far (“Mountain High”, “Bring The Demons To The Hall” and “Arnea”) Again an unnecessary intro starts the album (“Solitude”) but no worries Nemoreus….everyone does it. Now into the first and title track “Arnea”. My first impression is Korpiklaani inspired folk metal with English lyrics (Bonus!) with some German sprinkled in and folk instrumentation including fiddle with flute and bouzouki listed and obvious at times. I would say that on some level maybe even a little bit of my friends in Sekengard or Isenmor at times came to mind. For the most part, and maybe because the accessibility with the English lyrics and clean style vocals, this is fairly mainstream and I may lean more towards folk hard rock as opposed to metal. Tracks like “Your Honor Will Prevail” have a very radio-friendliness to me that I could hear it in general rotation on any radio station. I actually had an image of them playing at a Celtic style festival in my head while listening so some crossover appeal there as well. Overall song structure is pretty simple to grasp on the first listen and with the solid production makes for enjoyable listening experience. Favorite tracks for me included “Mountain High” and “Pain” with the heavier vocals. While the album is definitely going to have mass appeal in my opinion, where does it fare in the grand scheme of the raging ocean of folk metal bands? Above average for sure and one that I am confident will make it to some debut of the year lists here at the site.