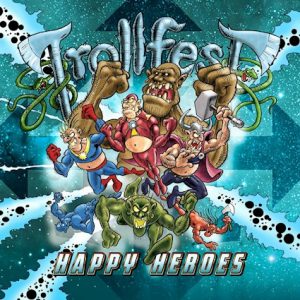 Well, it has been quite a while since Trollfest released their latest masterpiece ‘Norwegian Fairytales’. An highly appreciated album over-here. After this silence, True Norwegian Balkan Metallers found it was time to shake things up a bit. The band is well known for their energetic chaotic funny music. Maybe this brought them to the idea for this release. An EP with all kind of songs about happiness and heroes.

‘Happy Heroes’ is a true Trollfest track. It’s funny it’s chaotic, but not their best song in my opinion.
After this we get covers in Trollfest style. The first one is ‘Cartoon Heroes’, originally by Aqua. This one is featuring guest vocals by Miriam Renvåg Müller aka Sfinx. This one doesn’t really stand out. The guest vocals and Miriam’s contribution don’t really blend and this gives the song a bit the feel of a recorded karaoke session.
‘Don’t Worry Be Happy’, by Bobby McFerrin is the best track of this album. This is a really fun-cover of this song and Trollfest comes out the best in this track. The chaos is all over the place and you just can smile and move your body to this track.
Pharrell Wiliams’ ‘Happy’ is the last track. Funny, but it won’t be in my Trollfest favorites-list.
This leaves me a bit with a hangover. I was expecting to get a big party by Trollfest, but it turned out to be a bit of a disillusion.
Nice for in your collection or a good one to play at a themed party with funny covers.