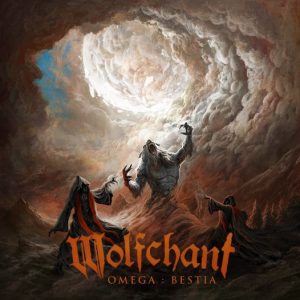 Since Wolfchant released in 2018  a Statement via Facebook that the members would like to focus on private issues and will not continue with the band nobody would expect that this will only end up in a short break and that already 3 years later Wolfchant will release with “Omega : Bestia ” their sixth full-length album this April. Wolfchant was going over the years through a lot of line up changes, but for sure one of the most emotional events was the tragic death of their guitar player Eddy “Gorthrim” (RIP) in 2017. In 2020 Wolfchant introduced “Seehb” (guitar) and “Ghust” (drums) as fixed new member of Wolfchant and completed their new full line-up. After an obligatory Intro in the first track “Komet” (Comet) the refrain of the song is already saying everything about this new release: “Mit Wut und mit Stolz schlage ich ein wie ein Komet” (Free Translation: With anger and proud I am hitting in like a comet”). Wolfchant is back with full power and the listeners will receive what they are used from the band. All expectations of a new Wolfchant album will be fulfilled with a load of their typical Pagan/Folk Metal, keeping the lyrics in German and English including clear and growled vocals.Rumbling drums, awesome guitar riffs, underlaying folky symphonic elements and in-going lyrics/hooks pave the way for another Wolfchant classic. Equally if they presents their lyrics in English (Into Eternal Darkness / Out in the Dark ) or in German they put a lot of efforts into an easy access and catchiness of their compositions. This is achieved with great melodies, a great story-telling attempt and as already stated really catchy hooks. For me it really hard to find any specific song of the album, which I could highlight, as they are all coming very strong. Anyway if I would need to chose any it would be “Der Geist und die Dunkelheit” or “Bestie”, simply because I really like the themes and the lyrics of the songs, but as already stated the album shows no weakness at all. It seems that sometimes a break is necessary for a band in order to come back stronger as before. “Omega:Bestia” counts for me to one of the best albums of Wolchant and without no doubt this release proves that the popularity of the band (especially in Germany) is more then justified. For sure one of the best releases so far out of Germany this year and a candidate for our Top 10 Albums of 2021.