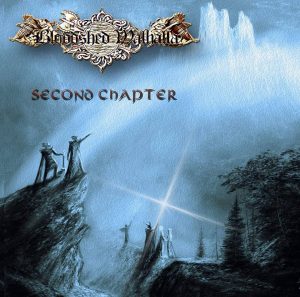 Of course the influence of Viking Metal Pioneer Quorthon and his band Bathory is still unbroken within the genre, but sometimes it is a very thin line between beeing influenced by or to copy a band. Bloodshed Walhalla is walking on this very thin line and with the sixth studio album “Second Chapter” multi-instrumentalist, singer and songwriter “Drakhen” continues his interpretation of the Norse Mythology. The album starts with the song “Reaper” with an unbelievable playing time of 28:20 minutes, which for some other bands would be enough to release a EP with 6 tracks. The track is basically telling the story how we get to Ragnarök (the end of the world in the Northern Mythology) and the song structure could be really from Bathory, mixed with a little bit of folk from Falkenbach. From accoustic episodes up to Old School Viking Metal/Black Metal, from growls to clean vocals and chants, from folk influences up to symphonic underlays the song is including everything what you would expect. The following titles “Hermodr”, “The Prey” and “After the End” are also ranging between 15 to 18 minutes and Drakhen is taking his time to interpret the themes of each song with full passion.To be quite honest I did not knew Bloodshed Walhalla since I choose to review this album and after hearing this album over and over again (which is quite demanding if you have to review only 4 songs with a total playing time of 1hour 17min) I am still very unsure what to think about it. In my point of view Bloodshed Walhalla can be really seen more as a Bathory cover/tribute band and for my taste the songs are simply much too long and quickly become monotonous. However I also need to admit that I need to give “Drakhen” a lot of credits for his compositions, which sounds are really coming quite close to the Viking area of Bathory. He was really making an outstanding job with all that instrumentalisations and is for sure a full-blood professional musician. The only thing what is missing here is an approach of creating an own style.