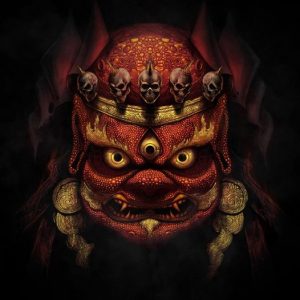 China based Folk Metal act Nine Treasures have released a new album about a month or so back, and it is high time we look at their new repository of Mongolian melodies and folklore. There are one or two trends across the album, but fortunately Awakening from Dukkha is a highly varied album, meaning that once again, this review will examine each song individually and then offer thoughts on the album as a whole.

The opener, “Black Heart” is eerily familiar to anyone who knows a certain pioneering Folk Metal band (*cough* Korpiklaani), and the high-energy, bouncy, romping riffs with the gritty vocals of Ashkan sounds suspiciously Finnish in that regard. But there definitely isn’t a lack of originality because, as the folk interludes attest, everything here would be novel to most European bands, from the melodic structure to the instruments (the indigenous ones at the very least). For anyone who hasn’t had much exposure to the musical traditions of Asia, there is an acoustic segment midway through the song that’s an excellent sampler and just a smooth transition between the comparatively more intense metal sections.

“Arvan Aid Guulin Honshoor” features a harsher take on the grit of the previous song’s vocals. There is a decent mid-paced riff, and both the lyrics and the melodies are quite catchy, though it would sound really silly trying to recreate them the in shower, for example. Overall, “Arvan Aid Guulin Honshoor” is just a catchier piece for headbanging to while having a drink (remember it definitely isn’t Korpiklaani we’re describing here).

With “Fable of Mangas”, they change things up slightly with galloping guitars reminiscent of Maiden, but the tempo makes the implementation different from some of the other more obvious examples of it. That just serves as an additional treat to any novice listeners. As with the other songs, its very drunken and giddy, but the sound is distinct but you could be forgiven for feeling like certain segments are too repetitive (structure-wise), as that is a part of the package with folk music as any reel from the other end of the globe will show. But then there’s the next song which takes the repetition to its logical extreme.

There is nothing wrong with “Nomin Dalai” nominally, and if one isn’t listening critically, the song is quite enjoyable. It’s even more upbeat and cheery than the other tunes. Great for drinking (but it definitely has no relation musically to Korpiklaani, uncannily enough). But from the start, there is an issue with the riffing. The riffing is completely monotonous, and the riffing complexity is sacrificed for folk melodies. Bowed melodies take the place of the guitar leads, and the balalaika is still sidelined to the middle of the song for a short interlude. While the song is alright as we’ve already mentioned, the question becomes, are the guitars even necessary when they are only there for accompaniment that at its worst borders on percussion? The line between folk and metal becomes blurred. Fortunately, even when the folk instruments take center stage, the implements of Metal can still mold themselves into decent sections.

For instance, “Tes River’s Hymn” begins with a very ominous-sounding bass line. But the song once again uses that staple riffing style mentioned for almost every song. While the folk instrumentation has some variety to it, this song may get a little stale if the listener isn’t invested.

But then the typical galloping riffs give way to something unheard on the album – a very melancholic bowed segment on the track “Ten Years”, courtesy of the Morin Khuur. While it was a tad unclear whether the music was trying to be a dark mournful elegy or just a more tragic sound is unclear, but the variation in the sound was a pleasant surprise. And here the other instrumentation sound as if they weren’t just written in as backing material.

“The Dream About Ancient City” is just an instrumental. It marks the point where the album begins another creative streak, and as “Praise for a Fine Horse” begins, a very different sort of galloping guitars is used. Here the guitar intro is reminiscent of the classical piece “the gnome” in that it sounds like a horse is running before the actual music starts (so in other words its not the Maiden style galloping, it is instead a horse imitated by a guitar). This song is also quite catchy even though the language might be foreign to the listener.

“End of the World” and “Wisdom Eyes” are both mainly driven by the folk instrumentation. They aren’t the most complicated songs, but they get the job done. The gem of this part of the album comes with the next song, “the Stubborn”. This song has decent heavy riffs, with no compromise metal sentiments, and finishes off with a strong, distorted ending. Overall a song that makes up for some of the weaker parts of the album.

Continuing in this heavy vein, “Three years old warrior” features weighty, heavy riffing and a light floating bowed that sounds quite enchanting compared to the rest of the material on offer. Like “the Stubborn” this song has a solid foundation and feels like it can stand alone musically more-so than some of the other songs that feel vocal driven to an extent. So there we have it. Awakening from Dukkha is a very familiar Folk Metal sound that sounds strangely reminiscent to bands like Korpiklaani or even Celtibeerian, but the vocals sound a lot like Jonne for some reason. Perhaps it could just be vague similarities between the Joik and traditional Mongolian singing, but there are some striking similarities. There is an ocean of difference though, and unlike with certain Metal acts, I don’t think the vocal style is just a Jonne clone. But while it has plenty of bombast and energy, Awakening from Dukkha is one of those albums straddling the line between Folk metal and folk Metal (the capitalization is key) which can make or break the music depending on the listener. But for a casual listen, this album is a solid release, so be sure to check it out if you haven’t already.