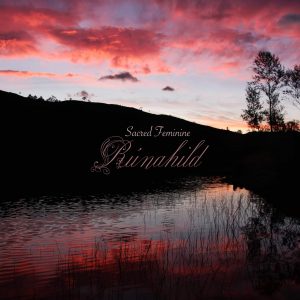 The EP has been a lost art form (in my opinion) with artists nowadays being able to release tracks at will or just going right for the full album. To my amazement, the heathen enchantress Runahild has taken her attempt at resurrecting it with her first ever EP “Sacred Feminine” and restored faith that more artists should pursue this option. There are 3 tracks here totaling about 18 minutes and I would say this is her most adventurous release to date under the Runahild moniker. For those familiar with her previous work going back to Eliwagar, she has always stayed firmly tied to Nordic folk music and created a sizeable library up to this point with not one misstep in the discography. With “Sacred Feminine” she has taken her growing confidence as an artist and transported her take on traditional music into the peripheral edges of electronica. If I was told that she was starting to meld some electronica into her music I am sure I would have had some skepticism at the results and second guessed if this was a good idea. I couldn’t have been more wrong. While she describes this release as “Ethereal Ethno Folktronica” (a description that I think somewhat works) it still is a hard combination to describe but must be experienced firsthand. The tracks would seemingly have a 6-minute average but opening track “Månekygge” is less than 3 minutes. The 2 remaining tracks “Draum” and “Sacral Energy” are both about 8 minutes each and have the most of her foray into taking the classic sound and adding subtle electronic touches. I am sure for those who are still unsure I would say you probably should be, but the amount of restraint shown in introducing this potential new direction is in just the right amount. While I think this is just a quick exploration into something different, “Sacred Feminine” is a welcome surprise as well as very familiar which is I think a balance a lot of artists try to achieve……progressing their sound while retaining enough of their past endeavors. Once again, Runahild has tread down a path that very few have been down before, if ever. “Sacred Feminine” has shown that Runahild is a force of nature and one of the most exciting artists or our time.