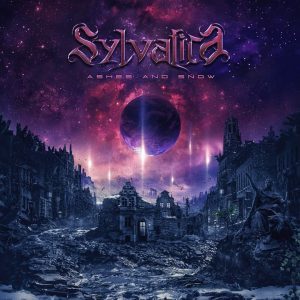 In yet another chapter in 2021’s bands making a comeback novel is the latest from Denmark’s Sylvatica. Entitled “Ashes And Snow”, the album features 7 tracks totaling almost 43 minutes of music. There is no need to wait as it has just been released on April 20th on Satanath records. After 7 years away the new album is the follow up to their debut “Evil Seeds” from 2014. It was necessary to dive back into the debut (which I am sure I have heard at some point) and I can say the time away and return have made for some monumental leaps forward from this 4 piece on “Ashes And Snow”. Description wise, I would say symphonic and progressive both come to mind as good words to start with, but neither one is just right. There is a wide variety of influences/comparable acts here and if a couple of bands were to help in direction, I think a lot of American acts jump out to me….Æther Realm, Wilderun, Yonder Realm all are strong. Maybe even some of the prototypical thrash/progressive acts like Cynic, Sadus or latter-day Death. I also think that there is a touch of Amorphis (especially in overall feel/phrasing) in their sound. While I believe that “Evil Seeds” was meant to push some boundaries, “Ashes And Snow” definitely has a much more mature and less frantic sound and one that strikes a balance between catchiness and musicianship….in other words, the busyness/brutality has been replaced by more memorable tracks but still retains a ton of riff forging, blast beats, fiery vocals and layered instrumentation. Sylvatica is guilty of the unnecessary opening intro (“Daybreak”) so the 6 remaining tracks have 6–7-minute average. I guess the question will come up if this is folk metal or not but I think the programmed parts definitely have enough of a folky vibe for me. While I am a big fan of most acts singing in their native tongue and in the case of Sylvatica they have opted for English which definitely works, especially given the content…..I would say some metaphysical, science and other similar subjects are touched on….remind anyone of Borknagar? That struck me while listening but definitely a different take. Sonically the album hits all the right marks but I felt some of the programmed parts might have been a little too hot at times but only personal preference. This is just a great and fun listen and while I don’t think it necessarily treads on new paths, “Ashes And Snow” is a reacquaintance to Sylvatica and sure to make some waves this year. Great album.