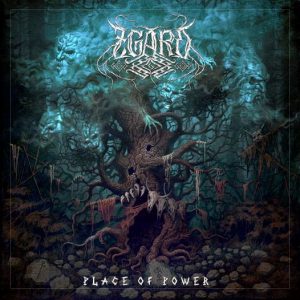 I had a feeling 2021 was going to be a year of the comeback and another project reappearing after a long layoff is Ukraine’s Zgard. Back a few years ago I would have been completely shocked that they would be in this category with a steady output of releases, but the last few years have been quiet. Only a single in the last 4 years and now a new full length in 2021. “Place Of Power” is their 7th full length and features 8 tracks at 47 minutes of music being released on May 21st for Schwarzdorn Productions. After another unnecessary intro (“Arise”), the remaining 7 tracks have a 6 minute plus average so lots to digest. So, the first thing I noticed before even listening to the album was that the song titles were all in English….would Zgard be delving into an English lyrics album this time around? Not necessarily as they have flirted with this idea before with English titles but strictly stayed with Ukrainian to deliver the message. I have a wide array of bands that are a reminiscent of Zgard’s sound from classic acts to more contemporary……maybe a little of Mayhem, Mithotyn and Falkenbach to a little of Skjaldborg? All pretty decent but the Italian forest dwellers in Selvans kept coming into my mind. Zgard has a very similar feel style wise, deal with similar subject matters (Paganism, Nature, Mythology, etc.) and Zgard’s main member Yaromisl has a very similar vocal delivery to Selvans……a mournful wolf howl which is extremely effective with the music and nice to hear something different than the raspy or “run of the mill” black metal vocal style. After the long layoff I would say the album sounds like the natural progression forward in Zgard’s history and this makes sense…..”Place Of Power” was actually recorded 3 years ago and is now seeing the light of day now. For those of you who have been fans of Zgard I think you will still be drawn in with the rich tapestry of riffs, keys and vocals with additional vocals by Endless Battle’s Dusk as well as the spot on percussion performed by Paganland’s Lycane. For you new listeners I think will find yet another amazing and unique act from Ukraine who embrace their heritage and history and weave it into hypnotizing music.