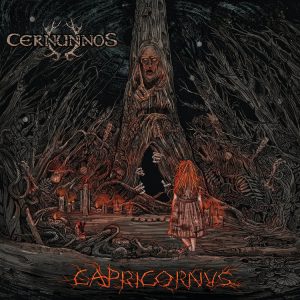 Cernunnos are back with their full-length release Capricornvs, a release they have been teasing since 2018 with their single “Survivors”. But as they mentioned in an interview with us after the release of the Svmmoner, it is indeed the case that all the tracks from that EP are on this release.

Because of how much lead-up releases there were (about a third the tracks and the runtime have previously been released) this review will only cover the 20-something minutes of unheard tracks, except when they have done a little something extra since the previous release, which is the case on two tracks. What better part to start with than what makes this version of old content stand apart?

It may be the producer, it may be the audio mastery, but either way, many of the older songs have a better balance between the folk instruments the and good ol’ trinity of drums, bass, and guitar. The vocals are better fleshed out as well, and while generally it’s the vocals that are more striking, “Torc” in particular sounds like an entirely new song beyond the wall of gritty and raw distortion. The production values are certainly a big change from the rawer BM style folk on the EP, and “Survivors” was a few steps in quality above the track I first listened to on Spotify back in 2018. And if all the old tracks sounded like “Torc”, the score would probably be higher off the bat, but they feel more like remasters than anything that changes the way I look at the old tracks. So perhaps the production values polished some songs more than others, but overall, the cleaner sound does make all the songs at least a bit more enjoyable than before. It also helps that there were some really ominous-sounding embellishments lurking behind the riffs all along.

“The Crowning” is a song that very much sets the mood of the sorcery and rituals that are mentioned in the lyrics throughout the album. It features crisp lyrics and folk instruments that rise above the guitars for the purposes of setting the tone of the song more than just playing your jolly jig because “it is folk music after all”. It definitely helps that, once again, the folk instruments serve to enhance the feel of the song rather than to drive the music in the traditional sense. Because of this and the relatively simple riffs, this reviewer gets the feeling the vocals may be intended as the main feature of the song, seeing as they just naturally jump out on most tracks.

“Ain’t no Hero” is a song of betrayal and remorse with the death/doom type riff bursts between more drawn out notes, though it does lack any other similarities to that sub-genre other than the structure of the music. One gets the feeling that heavy distortion and the darker embellishments carried into the chorus might help make the song a bit darker, but the lyrics do a good enough job on their own.

Of course like any Folk Metal release worth its salt, Capricornvs features the obligatory folklore song and straight up folk release. The former is about Cuchulain and stylized as “CuChulain”. This time it’s not just a song of deeds, it’s more of an “I am” song, a type of character song that can be used more often in a Folk Metal context.

The aforementioned folk instrumental is entitled “Durno”, which is a blazing romp of high speed Celtic melodies with some quick guitar licks thrown in there just to make it more Metal. “Durno” is not the most striking folk interlude on this release, however.

I hesitate to call the intro and outro “folk” in the same sense as “Durno”. While they use primarily folk instruments, they are that sort of weird borderline between traditional and fanciful in the same way most reconstructed pagan liturgies are. The intro is entitled, “Uphia” and features very eerie droning before equally ominous acoustics take over and the pagan chanting takes place. And if there’s one thing that compliments creepy intros its pagan chanting and shaman drums. “Tebsaia” doesn’t quite measure up to that but is a suitably ambient ending.

So overall, this album is a solid release. There are even a few of the old songs that force a double-take and only a third of the material is new, so there’s a decent portion of new content. As mentioned before, the fact that two tracks might be classed as filler doesn’t matter because they are also well-written, and that isn’t really an issue for the casual listener. In fact I’d recommend this for anyone into the darker elements of Folk Metal as long as they aren’t obsessed with the rawer BM style production values (in which case stick to Svmmoner). For fans of Cernunnos, however, I can definitely say the album feels like too little at once, especially if you listened the hell out of the Svmmoner when it came out. But of course, if Korpiklaani can release a dozen versions of “Beer Beer” and still get listens, then Cernunnos is probably in the clear. Anyway, don’t miss the short but sweet Capricornvs, available on Spotify and from darkTunes.