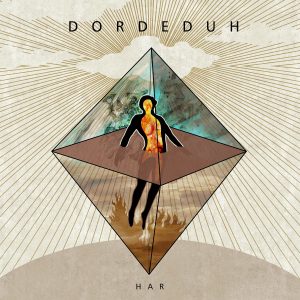 After nine years the Romanian Atmospheric Folk/Black band Dordeduh is back with its brand new album “Har” which will be releasedvia Prophecy Records on the 14.05.2021. The bands name comes from the Romanian three words “Dor de Duh”, which is translated with​”Longing for spirit” and there is no better name you can choose to describe their unique sound. After their extremely strong debut “Dar De Duh” in 2012they are still not only longing out for spirit but as well for​ perfection of their created soundscapes. Same as their previous album this new record​is not easy accessable and it takes time to fully get into it, but once you crossed that border their genius compositions are dragging you completely into it. The complexity of the album does not allow to make a track by track review, but in my opinion the record must be seen as a whole. The music itself has a range from Black Metal, Blackgaze up to very long​ Atmospheric Ambient with interplay of guitar solos amd traditional folk instruments. Vocals ranging from clean chants, singing and growls which are presented in Romanian language. If you look at the album as a whole, the band is archieving their spiritual approach. The lyrical themes are all about esotericism, spirituality and transcendence, which of course totally fit to the total concept. In difference to other bands in this genre Dordeduh​ is using very wisely​ tradional folk instruments to underlay mainly the atmospheric parts. Devinitively the album is a fair sucessor to their debut album and therefore deserves the same rating. I would really like to recommend this album for all Atmospheric Black Metal fans and for all Folkers it is at least worth a try. For myself I think the album is brilliant, even that it takes me several listenings to get completely into it.​ ​