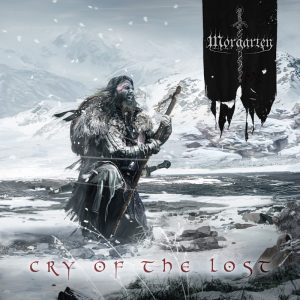 Morgarten out of Switzerland is back after 6 years with their second full length​ “Cry of the Lost” which will be released on the 18.06.2021 and the band already had​ been signed by Inner Wound Recordings. For me as Austrian it is of course funny​ to read that the bands name “Morgarten” is coming from the French Speaking part of Switzerland and the famous battle of “Morgarten”,​ where the Swiss defeated the Austrian army in 1315. I will not be resentful and will charge this album of course by it’s quality and one thing is for sure, Morgarten has this quality and is presenting a solid second release. As nearly every Folk Metal album also this one is starting off with a short Intro of hearing French chants preparing for an epic battle, which hits in quite heavily​ with blastbeats, harsh guitar riffs and symphonic backgrounds with​ their first song “To Victory”. The next song “Tales of my land” continues in the same way, but is allowing the traditional folk instruments​ more room, so that the bagpipes in this song can fully unfold themselves. “First Blood” is most properly the most kind of Symphonic/Folk Black Metal of the album, in which the singer Pierric spits out all his growls he has, fantastic guitar riffs and the tempo of the​ blast beats of Joel just blow you​ away. This song​ really reminds me a little bit on Trollheart or even Finntroll. The speed continues until you reach the track “Peaceful Soul of the Dying”, which black metal soundscapes comes very melancholic and dreary to​ unterline​ the lyrical theme. With the next song “Die or Fight” Morgarten is back to their core business with their typical style including some tempo changes. The last track “Meeting the Almighty” exites again with more epic and​ symphonic support. The full album has 12 tracks with a total running time of 63 minutes and I personally would rather describe their sound as Symphonic Black Metal with some folk elements. For me the strongest title is “Tales of my land”, due I really love the interplay with the bagpipes. On all other tracks traditional folk instruments do not play such a big part, it is more that the keyboard is building a symphonic, sometimes nearly orchestalic atmosphere. With the use of chants the sound receives another epic aspect. In general this record is very stable from the beginning to the end and surely will be enjoyed by Black Metal and Folk Metal fans in the same way.​ ​