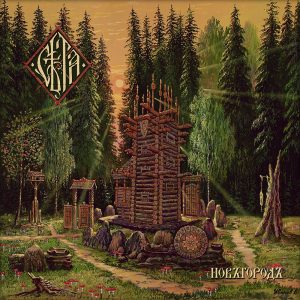 With the major lockdown over the last year or so, I have been a little surprised at the lack of new projects releasing material. It was nice to see something brand new from up-and-coming project Sieta arrive to us. Entitled “Novgorod” the album will feature 8 tracks totaling about 50 minutes and will have a release on Bandcamp as well as a CD release thru Earth And Sky Productions in June. This project doesn’t have real roots in folk metal to speak of, but members have connections in some other metal acts….progressive death metal acts Skyglow and technical death metal act Critical Extravasation. So, what should we expect? There is a nice blend of styles and I believe that is to be expected from a new project trying to find its signature sound. There are some up-tempo tracks mixed in with some mid-paced ones and I think that is where you hear some of the other projects they are involved with cross into Sieta. The folk instrumentation (whistle/flute and some stringed instruments it sounds to me) and keys feel like the differentiating factor here giving it that more pagan vibe. There is also a good use of different vocal style (black/heavy and cleans) to help propel the tracks. The musicianship is definitely top notch with all players being in control at all points. I’m not sure if there is one or even a few bands I could put together that they remind me of….considering their home (Moscow) I guess Russian/Ukrainian acts would come to mind like Nokturnal Mortum or Kroda and even some of the extreme stuff from Rogatiy Kolokol entered my head while listening, but I would say only at points. The tracks tend to be on the longer side (6 plus minute average) with one track (“Battle”) topping over 12 minutes which I found to be extremely ambitious for a debut album. Lyrics are in Russian and based on song titles there could be a central theme to the album but not necessarily to the point that you have to listen to tracks in the order presented…..at least to my ear. Production wise the album has a nice classic sound to it with a thrashy guitar sound and a more analog feel to it which I tend to prefer, and it gives it more of an atmospheric mood. By the way you can also find them doing a killer cover of Forefather’s “Theodish Belief” on line. Assuming this project moves forward, Sieta has a nice collection of tracks to build upon and hopefully will solidify them continuing onward. Good album.