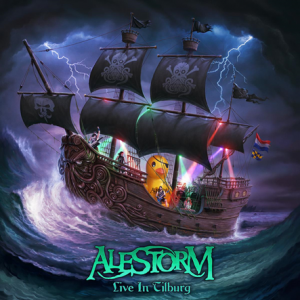 After their somewhat tepid Curse of the Crystal Coconut, some slightly out-of-place singles, and some band members’ admission that they’re running out of ideas, some of the more conservative Alestorm fans might have been wondering how Alestorm will redeem themselves, and moreover, if their next solid release would turn them into a pirate-themed Nanowar of Steel (I mean those chaps began doing pirate music recently so maybe they know something we don’t). But as it turns out, not only does Live in Tilburg show that Alestorm is still going strong, but that the band runs some of the funnest damn live shows you’ll ever see.
The setlist plays it pretty safe. At one point Christopher Bowes evens flat out says: “Unfortunately we don’t have that many new songs that are good, so here are some old songs.” All the classics are here, “Keelhauled”, “Mexico”, “The Sunk’n Norwegian”, “Shipwrecked”, “Drink”, and even the infamous anchor song. This is one of those live albums that’ll play like a best-of album, assuming that the crowd-work doesn’t deter from listening to the songs individually (which some live albums do). It should be noted the video was used for the review, so we are unfortunately unable to tell whether the crowd-work would interfere with listening to individual songs.
Speaking of the crowd-work, it is phenomenal. Christopher Bowes has a way of making mundane crowd interactions over-the-top, and they even gave a dedication to a fan that got injured before the show. The crowd is also incredible, almost of Blind Guardian caliber; and they carry the choruses to soaring heights in the typical sing-along Power Metal tradition. Both the passion of the crowd and the passion of the performance itself makes the video incredible to watch. The band members are clearly enjoying themselves as much as the crowd, and the emotive music generally improves the quality of the music, which unfortunately has several shortcomings.
Now, the songs are performed well, however because there is obviously no sound mastering or editing, the individual instruments almost sound isolated when they play their leads, notably the guitars in the first few songs and certain keyboard leads throughout the show. However, this aspect inadvertently fleshes out the bass, and hearing the bass part so clearly is an interesting change to the usual Power Metal studio album formula. Overall, aside from the balance, the music is of comparable quality to the studio albums, and the vocals are excellent. One shining example is how they recreated that crowd-like backing vocals from the studio version of “Sunk’n Norwegian” without any editing work. Aside from the backing vocals, Eliot Vernon deserves special mention for his harsh vocals.
They brought in some special guests for “Drunken Sailor” but why they chose the people they did must come down to their professional relationships with the guests as they aren’t exactly the sort of musicians you’d expect to find at a Metal show. There clearly is synergy between the guests and the band, and while they may not add much to the show (the acoustic guitar can’t be heard and the rapper just does a few bars), the drinking game at the start of the song and the interactions of the guests and the band is fun to watch.
All in all, Live in Tilburg is just fun. It will give both listeners and viewers serious nostalgia for live shows (at least in places where the pandemic still has restrictions on venues), and it is just a reminder of how incredible Metal shows can be. For those looking to buy this album, I can’t recommend either the DVD or the Blu-ray enough. The video is just flat-out entertaining. Compared to other live shows that have been released to video, Alestorm certainly are playing in the big leagues. Through this release, Alestorm have solidified their place as a serious Metal band, though they may joke and play and generally hide it from the world. Good testament to the band, solid release, and generally gives you hope for True Scottish Pirate Metal.