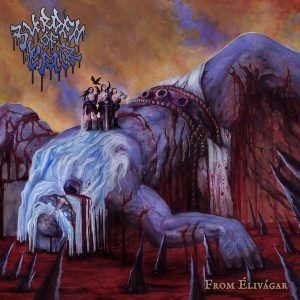 I have been pretty fortunate to witness many acts from their humble beginnings to multiple levels of success. One of those acts that comes to mind is Canada’s Burden Of Ymir. From a recent start to the project (2019) there have been numerous releases including 3 full lengths with a 4th poised for release. “From Elivagar” will see a release date of June 21st for label Black Spark Records with 10 tracks totaling 44 minutes with 2 tracks (“Until A Meeting Of Forces Primordial” and “And New Branches reached Out”) already available to check out. With every passing release I enjoy this project more and more as the unique approach of blending what I would consider classic black metal, Viking themes and folky touches keeps me riveted. The protagonist of the project, Dr. Joseph Caswell, has reached higher grounds with each release and become increasingly confident which I think if you go and listen to the catalog from the beginning is evident. As with past releases, lyrical content is based around Norse mythology, and I guess a concept album would be an appropriate description but loosely tied together and not so confining listen wise. The music tends to be on the heavier side…let’s call it somewhere in the Bathory/classic Satyricon range with a contemporary flair. So, if you have listened to the discography you may be at the point of wanting to hear something different and maybe not so much like previous releases and I think “From Elivagar” may be just your ticket. The guitar riffing is more prominent, and the diversity of styles and ideas has expanded with more clean/choral vocals which reminded me a lot of Falkenbach or Mithotyn and of course that omnipresent accordion will always bring Varang Nord to mind. So, what is the next evolutionary step For Burden Of Ymir? Well, I don’t see any reason to change what is happening since it still piques my interest and is enjoyable to listen to….maybe additional musicians? Not sure if that would ruin the secret formula so let’s just keep hoping that Dr. Caswell keeps channeling the good stuff going forward… great album.