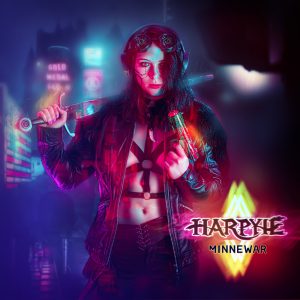 Harpyie wasn’t a band to the taste of the team-members of Folk-metal.nl. I always drew the shortest straw and ended up doing the reviews. This changed in 2017 with their album ‘Anima’. From there the band started to make albums I really liked, including the make-over of their first album ‘Blindflug’.
For some reason the band used the Covid-period to work some tracks of other German bands over and give them a Harpyie sound. I’m not really a fan of covers. Most of the time the original song has just what it needed, so why do a make-over. Well there are brilliant one, which even end up in my ‘Favorites’ playlist. ‘I See Fire’ (Ed Sheeran) by Feuerschwanz is one of those rarities. This makes I’m not to keen on doing a review on an album like this. But since the band seemed to have thought this over quite well, I’m a bit curious too.
I’m looking at the playlist and get some shivers. Touching signature songs like Saltatio Mortis ‘Spielmannsschwur’, In Extremo’s ‘Vollmond’, Subway to Sally’s ‘Kleid Aus Rosen’ and above all Schandmaul’s ‘Willst Du’, that’s a daring thing to do.

Since I’m a huge fan of Schandmaul’s song ‘Willst Du’ and just listened to a beautiful version by Subway to Sally together with the ladies of Schandmaul, I can’t resist to listen to this one first. Probably I shouldn’t have done this. I can’t listen to this version of this beautiful song. The song is raped and derived of all it’s beauty.
Starting from the beginning is what I do, with some fear I give it a try.
The songs aren’t to bad, I discover when I are not that familiar with the song, I can handle it. With ‘Spielmannschwur’ I can’t find a significant difference.
For me the album should have ended after 8 songs. Especially the last two songs are a shame.

This leaves the album with only a handful of nice songs. A few tracks don’t do anything extra for the song. And the band should be jailed for the last two songs.
Since the band seemed to put quite some afford in making a Harpyie remake of the songs, I think I’ll be mild and give rate it a 6. For me personally it strengthens my opinion that very seldom a song deserves a make-over.