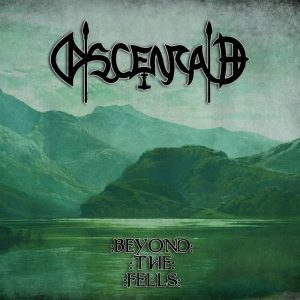 The one man band​ “Oscenrad” of​ Hæðenwulf from the UK has just indepentently​ released it’s​ Debut Album “Beyond the Falls” on the 28.05.2021.The album had been recorded between 2017 -​ 2021 and Oscenrad understands themself​ as “Anglo-Saxon Heathen Metal”. The name Oscenrad comes from the words Os “God/Woden/Mouth” Cen “Torch” and Rad (Ride/Journey) and the band covers lyrical topics such as paganism, history, poetry, folklore, mythology, nature, philosophy and spirituality. With Oscenrad​ Hæðenwulf puts us back into the pre-christian age of the Anglo-Saxon England and North West of Europe and harken​ us back to the Old Gods of Heathen Lore of times long gone by. The album includes 6 songs and beside of one instrumental all titles coming quite long with a playing time​ between 8 to 12 minutes. As quite normal for such long tracks the music is a mix ranging between mid-tempo driven Metal including more atmospheric and epic, partly acoustic​ interludes and harder episodes. Traditional Folk instruments do not play any big role here, very limited you can hear some underlaying nearly symphonic arrangements, which should underline the epicness of the tracks. The vocals range from growls to clean sayings or as well chants used in the background. Lyrically there is basically nothing really new, every track is somehow connected to the topics mentioned, if it is about battles, invasions, runes or​ the praising of Woden. Personally I think that Hæðenwulf was working very hard on this album as with every song you get the feeling that he was searching for perfection of every single arrangement of his​ titles. In general I can say that the music​ is heavily influenced by “Bathory” in its style and of course it is very hard to compete with such pioneers. Without no doubt​ Hæðenwulf is a professional multi-talent of all instruments, but in my opinion the songs are coming partly too​ tedious and too monotonous. There are really only very view bands out there who can perform this kind of long titles on a very high level. In example Bathory, Primordial or Moonsorrow. I have listened to the record over and over again and partly the music​ was just passing me by without receiving my full attention. Anyway this should not mean that the album is not worth to listen to or bad at all, I just think that it will still take a little time till Ocsenrad will reach the level of perfection the band is looking for. I would recommend every fan of Bathory or​ Ruadh to give the album a chance and to make yourself​ an​ own picture.​ ​ ​ ​ ​