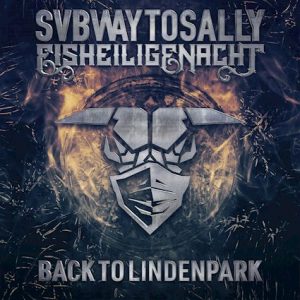 Subway to Sally treats us on a special release. The band has it’s own little tour for many years in Christmas time, the ‘Eisheilige Nacht’ tour. Iceholy Night would be the most understandable translations for this. They play in several German places during about 2 weeks, invite some very nice bands for this tour and headline themselves.
I had the pleasure to visit these festivals for a few times and was delighted the band did a streaming one last year due to the problems we all know. To support some bands we have ‘visited’ various concerts during the last year, Subway to Sally’s Eisheilige Nacht was one we couldn’t skip.
There are always some personal issues with Subway to Sally for me. Their change to the ‘midlife crisis style’ during the last few years is something which bothers me. The change to a somewhat darker style isn’t that bad, the loss of authentic instruments while doing this is for me. The outfits which go with this style only make me laugh, ‘guys, we are all getting older, please don’t do this’.

Since I watched the live stream already in December, I can’t really judge this album 100% objective, but I don’t think that’s really a problem. You notice very soon when you listen to this album we’re dealing with an concert registration. A very nice registration, so no problems there. Because it’s life you will notice the absence of the audience soon. That’s something all bands had to deal with this year. One one hand you’ll miss it a bit, but on the other it makes it a perfect special covid edition.
The chosen songs are great and as a replacement for their festival with other bands Subway to Sally invited lots of artists to perform their songs together. A very good and nice choice.

The intro of the concert makes use of the well know words when Covid was stopped by an evangelist. And it worked…..
Luckily the concert brings salvation. Probably not a coincidence the second song is ‘Messias’. When watching the DVD you will notice StS didn’t choose for the usual stage-concert. They use the whole room for playing together, a wise choice in my opinion, it doesn’t give this ‘concert-without- audience’ feel. They’re exploring the situation a bit in the beginning but they getting more used to it during the show.
The setlist changes from songs they play all by themselves to collaborations with other who are in the studio as well (most of the time).
Birgit Muggenthaler-Schmack and Saskia Maria Forkert of Schandmaul joined in for a beautiful version of Schandmaul’s ‘Dein Anblick’ followed by a very nice version of ‘Kleid aus Rosen’.
The help of Feuerschwanz and Saltatio Mortis is used which is always a treat.
But besides Schandmaul the collaborations with Patty Gurdy, Chris Harms of Lord of the Lost are more special, in these songs a special chemical reaction is noticeable. And you can shoot me for this, but the CD and DVD have one benefit over the live-stream, it’s possible to skip the tracks with Major Voice. It’s probably my taste, but I don’t like these tracks.

To some it up. An awesome release. A must have for all Subway to Sally fans, but a collector’s item for all music lovers as well. Subway to Sally created a very special memorial for the Covid period. A special concert
in an intimate setting with the collaboration of a few artists in the venue and some miles away, as things were done in covid time, we would probably say in a few years.
Seems there are a few good thing coming out of the covid-period. Subway to Sally’s ‘Eisheilige Nacht – Back to Lindenpark’ is one of them!