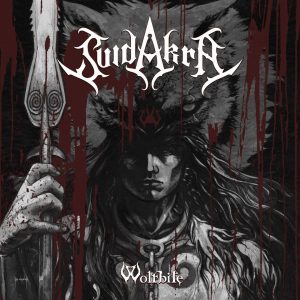 After meanwhile over 26 years of​ band history,​ 15 full lenghts releases including worldwide tours in Europe, North America, South America, China and India I certainly can say that SuidAkrA​ counts to one of the flagships of the German Metal Scene in General. The band understands their own style as Celtic Metal which is basically a mix of Melodic Death Metal and Folk Metal. While the lyrical conception was always​ clear in mainly dealing with the Celtic Mythology, SuidAkrA​ was constantly developing and re-inventing their musical attempts​ during their bands history. Since November 2019 SuidAkrA​ is signed with MDD Records and will release on the 25.06.2021 their new​ record​ “Wolfbite”. The sound of of chains, whips and screams are opening the first song “A life in chains”, which will most properly already break the one or others headbanger​ neck. Hard​ guitars riffs combined with the use of blastbeats and the harsh growls of Mastermind Arkadius together with clean vocals of Sebastian prepare the further way of this new album. The howl of a Wolf opens the second track “The Inner Wolf” which is not losing any of the intensity and increases once more the aggression of the record. Different genres as Melodic Death, pure Death to nearly Black Metal elements merge in this title, which perfectly reflect to the lyrics and topic of the “The Inner Wolf”. With the next song “Darcanian Slave” they lower​ down​ the tempo just a little bit and bring back in more melody. The first time on the album you can also recognize some folky elements in the background​ while​ the two vocalists give each other a battle of clean and growling vocals. “Faoladh” starts with an very nice celtic instrumental prelude, just to explode in another harsh track driven by fantastic guitar riffs. With “Crossing Over” SuidAkrA​ brings a little variety into their new release. An nearly​ instrumental track which slowly builds up the​ tempo and paying a lot of attention to the skills of the musicians, an accustic interplay in the middle of the song, only accompanied by atmospheric whispers, ending up with great guitar solos. With “Vortex of Carnage” SuidAkrA is back in their core element of Melodic Death Metal and are destroying everything that gets in their way. Once again you receive a nice prelude to the following song “Resurgence” with some celtic influenced melodies and this time bagpipes and violins​ are as well used during the song itself, which creates the first time on the album a kind of “Folk Metal​ Feeling”. Right with the next song “Redemption” the focus is clearly again back on the hard driven guitars, blastbeats and growls. With the last song “A Shrine for the Ages” SuidAkrA brings a kind of celtic metal ballad with clean singing and bagpipes, a worthy end to the album. For myself there are two aspects, which make this release and SuidAkra such strong.​ The first one is that SuidAkrA can always deliver in all kinds of genres they are playing. If it was the accustic album “Cimbric Yarns”, their celtic folk metal classics “Book of Dowth” and​ “Caledonia” or even this more Melodic Death Metal driven album “Wolfbite”. I also need to say that even on this new record itself the band brings a lot of variety into their songs. The second aspect is that SuidAkrA​ really understands to constantly evolve their style​ and with “Wolfbite” the focus clearly lays on more hard driven Metal, which brings up one of the most aggressive albums in their history. Big Congratulations and a big “Thank you!”​ to SuidArkA​ in delivering us such a great, solid and worthy album Nr. 15!​ ​ ​ ​ ​ ​ ​