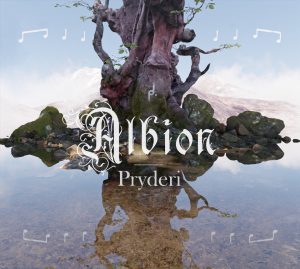 Sometimes life is really amazing, I basically never heard about the Band Albion out of UK in my life and by co-incidence browsing Bandcamp I found the band and their first EP “Pryderi” and they immedialtey got my full attention. The band Albion has been formed in 2019 and with the foundation of this project the idea of the preservation and exposure of traditional folk music presented through the modern medium of metal and rock was born. Albion presents Progressive Folk Rock/Metal, creating a sound that combines the modern worlds of rock and metal with the centuries old tradition of folksongs. The Debut EP “Pyrderi” starts with a very nice instrumental song called the “The First Branch: Parentage/Birth” combining wonderful accustic guitar and flute melodies with metal in such a way, that the title is not only coming folky, but as well very epic and heroic. “The Second Branch: Bran and Branwen” is a typical progressive rock/metal song which builds up a great atmosphere and giving all instruments enough room to unfold themselves. Soulful clear vocals along with the use of some folk elements are making these song very intense and idyllic. “The third Branch: Kin, Enchantment” is again bringing a great harmony between folklore and alternative progressive Metal, the interplay of all musicans is just fantastic and especially in this track you really can feel the dedication to folk music. For me the strongest title on this release! With the song “The fourth Branch: War,Death” Albion is closing their first EP. A lot of tempo changes, silent accoustic and atmospheric parts are combined with Melodic Metal. After an strong Metal episode the last track is ending in a 3 minute folky accoustic soundcape. This new EP is 24 minutes long and all of them are worth to have a listen. “Pryderi” is impressing by its unique approach in combining the elements of folkore and progessive metal and Albion is presenting them as those genres belong together since the beginning. I really can only recommend to get their EP at their bandcamp store, there is nothing you can do wrong!