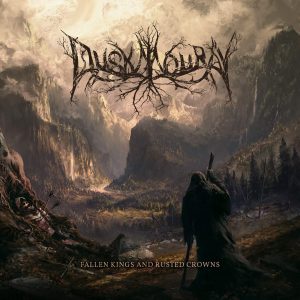 Halfway thru the year and another of my most anticipated releases has been monopolizing my listening and that is the latest from Duskmourn. Titled “Fallen Kings And Rusted Crowns”, the  3rd album from this duo is an independent release and was officially released on June 19th.  Eight tracks at over 47 minutes are what you will get here so a robust 6 minute per average track length with first single “Deathless” being the longest at over 7 minutes. While they have been somewhat labeled/genre tagged as “Tolkien” inspired metal (hey, I said it too) with this new release I feel they can shed that attachment and have a wider appeal and not be so potentially confined. First off and again, I am blown away that they are basically from my area (northeastern Pennsylvania and New Jersey) since I am sure if you told me they were from Canada or Europe I wouldn’t doubt it. Stylistically, this style of music is not one you think of coming from here with some exceptions like the always epic Frost Giant and Windfaerer but still even these acts don’t delve as deep into the forest as Duskmourn does. Black mountains, warfare, death, destruction…. and did I mention forest? I can listen to this subject matter all day long for songs….I guess Moonsorrow would be the band that I come back to as a close comparison, but Duskmourn I believe is a little more direct and to the point…less meandering about and straight to it. What I have found with “Fallen Kings….” is that it has a nice balance between their debut “Legends” and sophomore effort “Of Shadow And Flame”. The brutality “Of Shadow….” and the symphonicness (new word alert) of “Legends” has been melded into “Fallen Kings…” with two new wrinkles to my ears. I feel the tracks have much more complexity/progressiveness at points but not overly busy plus the songs have more hooks. At the same time, there are more memorable and dare I say “earworms” here (look it up if unfamiliar) leading me to the conclusion that this album had more openness to the ideas of what the Duskmourn “sound” is as it is constantly evolving. Walter and Bill have still stuck to tracks that are still instantly familiar as them (“Blood Of The Forest”,“In The Chamber Of Incantation”) with tracks like “Mountain Heart” (probably my favorite here) coloring just outside the lines and finding a different way to express themselves not too far removed from the other tracks. They even have closing track “The Harbinger” adding in some mandolin from The Dread Crew Of Oddwood’s Andrew Schuman. The sound is face ripping with Iguana Studios handling mixing duties and drums performed by Kevin Paradis taking the whole album to another level. If you thought you had Duskmourn figured out, guess again…..they are even more intense, riveting and awe inspiring than ever……great album.