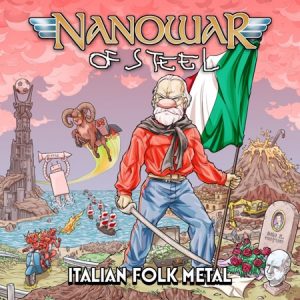 PARENTAL ADVISORY! The Hardest of the Softest Metal or lets say Hard Rock or maybe even​ Pop​ Bands in the World​ NanowaR of Steel is delivering us with “Italian Folk Metal” a Masterpiece of the most underrated albums of the year! Hide your Pasta and prepare that the​ Polenta Taragnarock will happen soon!​ At least if Italy will not win the European Soccer Mastership this Sunday the end will be near (at least in Italy)! The instrumental “Requiem for Gigi Sabini in D minor” is opening this monster release in order to begin the massacre with the “Siege of Porto Cervo” with Ryan Air fighters taking​ off from the Tirrania Aircraft ships, but only after the happy hour. The first track is already a perfect mix of hard folky​ Death Metal mixed with overwhelming Folk Power Metal. The “Curse of Captain Findus” tells us the story of the fishermen Findus, who is fighting against the coast guards to get the fresh frozen fish to the Italian plate in time. The smell of the Adria in Bibione in the high tourist season lays in the air. Fried Fish, Pizza and Schnitzel. One moment was Schnitzel Italian? Who cares?? However a great Folk Power Metal song with everything you need. The real heroic Italian Folk Metal comes with the “March of Piazza Grande” opened by an nearly national athem-like operatic singing and choir to salute the television host and actor Magalli! The title of the next track “The Mazurka of old man looking at the construction sites” says everything and nothing about the​ song. Italian accordion melodies accompany the guitars and the great choirs on that one. On the next track it is getting the first time very​ serious due “La Polenta Taragnarock” is killing any doubts about the great Polenta out of Italy. Forged by Thors ladle, the effect of Viagra filling your stomach “Ginnungagap” after this track there will be no more discussion who mades the best Polenta. Even Amon Amarth could not argue anymore about this topic and in Sweden they have no Polenta at all! “Scugnizzi of the land of Fires” we get some really typical Korsian Italian sing along with a lot of melancholy, dedication and very kitschy. The next song “Rosary” is lowering the harsh and brutal tempo a little bit down to present us the first kind of ballad dedicated to the serious topic of rose sellers in the evening. I do not know where they take their courage to treat​ such a sensitive topic. “The Lord of the Rings of the Stadium” is getting the support of a bagpipe and is keep in typical Soccer Folk Metal, fighting all the bastards like Samuran, Nazguls and Uruk-Hai. Was is clever to use bagpipes if Italy plays England in the upcoming soccer final? Ok, from where should they know that they will come so far?​ However a little bit too risky! But who believes that NanowaR of Steel is only singing about old topics is simply wrong, as with “Gabonzo Robot” they are also very wisley singing about the killing machines of the future! “On the rates of Freedom” it is all about invoices, accounting reports, chamber of commerces, taxable amounts and all that topics we desperatley waiting for. Can not deny that the folky sound makes this themes very interesting. Calling now my tax adviser. Finally with the “The Curse of Captain Iglo” they are bringing a song in my mother tongue German and my Google Translator shortly stops smooking. Need to agree to this Alestorm-Like song that Captain Iglo has the best Oven Baked Fish in the market. I already tried others, but Iglo is really the best. Sometimes you even get them cheap in the value package. Fishing! Freeze! Bread! With the Captain Iglo song and the last song “El baile del viejo que mira las obras” in Spanish they should that Italian Folk Metal is International! Translated to “The Dance of the old man who looks at the works” it seems that the old man is still fascinating them. A great Spanish Italian Song!So my​ beloved guys from Rome, do you really think you can make fun about or beloved genre Folk Metal?​ Did you noticed that our homepage reads folk-metal.nl ??? Wait a minute I do not know if we received the request for a review or if I do that freely from my side ? At least I picked that album from our to-do list? HmmmmAnyway you dare to make fun of us ??? Good, because exactly that is what is needed !!! The only downside is that you are singing in Italian, which is a pitty as there are for sure hundreds of inside jokes, which only Italians will understand. The album is great and for a long time I didn’t had such fun when listening to your comedian approach on (Italian)​ Folk Metal. You are a brilliant Comedy Metal band and understand to entertain the audience and that it all what is needed. Thank you for bringing a smile into our faces and wishing you great sucess with this very funny and partly stupid release :-)​​