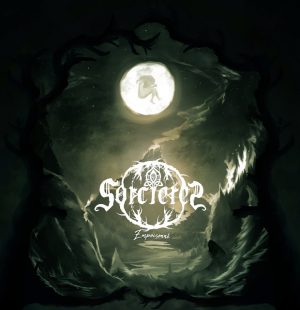 The French black/folk metal band Sorcières out of Lille just released their first full length album “Empoisonné” on the 21.06.2021 via Epictural Production. The band had been founded in 2017 and the name Sorcières is French for “Witches”. The lyrical themes are all about Nature, Darkness and Folkore. The album starts with the track “Anciennes lueurs” which is solely building up a very dark witchy atmosphere by fantastic guitar riffs and great harmonies. The vocals are kept in French and in the typcial used growling style of the Black Metal genre. Beside the minimal use of some accoustic guitars I can not find any folk metal related instruments in the first track, which is changing with the second title “L’auberge des corps perdus” with Marie delivering us some nice melodies on her violin. With this song the fusion of the traditional instruments as the violin, flutes and atmospheric melodic Black Metal starts in creating a very nice folky soundscape. Harsh growls of Pierre are opening the third title “Empoisonné” and bringing again a very nice interplay of all musicians. In my personal view I very much like that the blackend metal never comes to monotonous, as David on the bass, Thibaut and Roman on the guitars ensure the melodic approach and atmosphere with great guitar riffs and a sense to keep the harmonies floating over the titles. “Les Yeux Verts” starts very folky in order to drift away with some blastbeats of Tritt on the drums to some more melancholic fields, coming through a dark and sad melody, which continues with the next song “Ordalie”. For sure Sorcières understands how to build up soundscapes in a very professional way. Even when Pierre Alain is growling like hell over the melodies in this track it never sounds too harsh or aggressive, but it fitting for me totally in the total concept of a melancholic melodic folky sound. Right on the next title “Cavalière des ronces” they are showing that they can do it different as well. For sure the most hardest track on the album delivering harsh stomping guitar riffs, deep growls and suddenly in the middle of the track they are coming back to their core business of Atmos Black Metal. In this one the folk instruments do not play any big role. On the next track “Dans ces eaux” we receive very interplay of a black metal driven track and great guitar solos. The longest track with over 8 minutes “Défloraison” is delivering us a lot of tempo changes with harsh metal and slower episodes in order to end in a more then 2 minute atmospheric ending with doomy sounds out of the forest, which interludes to the last track “A feu et à sang” which is again combining all elements the band has to offer, inclusive the use the violin. Furthermore Sorcières is using as beginning and ending of every song some sounds out of the forest, mostly the sound of a small brook that boobles its way. In this way they are connecting every title which enables the listener to see the album as one. As a small recap I can only say that the year 2021 is really overwhelming in respect of the amount of releases so far and that there is a lot variety which comes along with the same. I personally like the approach of Sorcières and to a certain extend they are really delivering some kind of new Folk Metal Style combined with Atmospheric and Epic Black Metal. I like the way how they build up the soundscapes of their songs, especially on “L’auberge des corps perdus”, “Empoisonné” or “Ordalie”, which count to my favorites on this piece. The attempt of this band is great and they delivered a very strong debut album and it is to hope that we will hear more from them in future. Congrats!