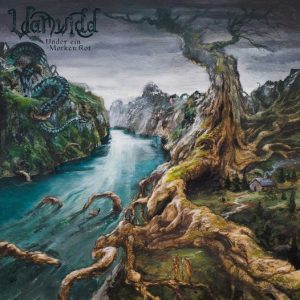 After a waiting time of 5 years the Norwegian Folk Metal Band Vanvidd released their second full lenght album “Under Ei Morken Rot” on the 21.05.2021.Vanvidd was already formed in Arendal, Agder (Southern Norway) in 2013 and their music is heavily influenced by Norwegian Folklore, Paganism, Mythology and Nature. Their second album starts off with an instrumental “Preludium” which attempts to bring us into the right mood for the upcoming titles. Already the first​ song “Havtrollet”​ can fully convince with a mix of an up-rising pounding rhythm, heavy melodic guitar riffs, deep​ growls​ and sometimes nearly black metal influences, all combined with some folky and partly nearly orchestralic​ backings from the keyboard. The next song “Blodsjord” immedialtey continues with the harsh approach of the band and stomping melodic death metal and​ blackend metal alternates with more quiet mythical episodes. So there is a lot variety within their songs. At least with the next song “Nekroalkymi” it became very clear to me, why I found this genre​ such​ familiar. For myself one of the main musical influences must​ be Finntroll, as the​ style of Vanvidd with all that orchestralic support, blackened Folk Metal really sounds very close to them and this is meant as a​ compliment. With “Fjellheimen” the band takes away a little bit of the tempo and the song comes for me a little bit more melodical. With the interlude “Ved Rundarne” we receive a little break hearing only a​ children choir singing, which comes very unexpected, but Vanvidd is translated to “Madness” in English, so better not to ask for any explanations :-). Maybe Vanvidd also needed a break in order to feature on the next track “Storm” nobody else as their Norwegian Folk Metal Pioneers​ Trollfest. You can imagine what happens when “Madness” (Vanvidd) and “Trollfest” are doing a track together. Less Black Metal, but more typical​ Folk Metal! Total Chaos! Fantastic! Another interlude awaits us with a melancholic accordion melody on “Om a Drikke Tvimenning” which connects directly to the title “Fenalar”,which comes very epic and impresses by its gloomy atmosphere. With the next song “Orm” Vanvidd throws in everything they got to offer. One of the longest and most varied songs of the album. The last track “Under ei Morken Rot” brings one more time variety to the record offering​ a very mystic, meditative and melancholic​ atmosphere track, keeping aside any exteme metal parts, more sounding like an atmospheric black metal piece with an orechestralic folky touch. This new​ release contains 11 tracks (including the prelude and two interludes) and brings it up to remarkable​ 57 minutes.Even that “Storm” has a feature with​ Trollfest, my favorites on this album are certainly “Havtrollet”, “Blodsjord” and “Under ei Morken Rot”.​ ​ ​For myself a very solid album with a lot of variation in style and atmosphere,​ avoiding​ any gap fillers and keeping the listener happy.