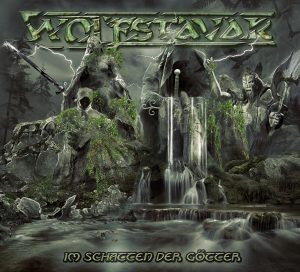 Almost 4 years ago Wolfstavar released their first album ‘Gesang der Meere’. A band with potential but with a bit of a, as we say in the Netherlands, sound of 13 in a dozen.
How will they have developed after all this time? Starting the album with ‘Auf Nach Walhalla’ brings us song which will do it very well live, but the mix could be better and disappoints me a bit.
Listening to the album further the mix is better in other songs, but despite of the nice bagpipes everywhere the sound isn’t very unique.
It reminds me a bit of a quite well know German band Adorned Brood, which I have only seen as starter of semi-starter of a festival. Nice songs, but never outstanding of distinctive.
Best track of the album, that’s why it’s probably chosen as the first single is ‘Hymirs Versagen’ in my opinion. And I think overall the last 4 tracks sounds the best.
Has the band taken some risks in their second release? No, not really. Everything sounds pretty much the same as in their earlier work. Have they developed? Yes, there are some nice tracks on this album, where it’s clear the band has some years of experience and the songs are well done.
Decent album, but a bit of a pity they don’t have a more distinctive sound.