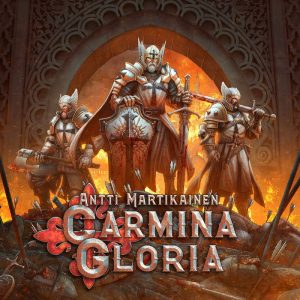 Antti Martikainen is an independent composer from Finland whose pedigree spans from video games, pop music, and his eponymous solo fantasy/power metal project. I went into Carmina Gloria a little unaware of his work, or so I thought, as he has writing credits on Nine Scrolls (an RPG I’ve played a while back). Carmina Gloria serves as the 18th release for the artist, so to say the man’s busy is more than an understatement. From start to finish this album paints a majestic picture brimming with styles from every corner of the globe. With nice folkish touches featuring violin pieces and hurdy-gurdy, to middle eastern themes, flowing from one song to the next in a fashion that presents stark and vivid motifs that are undeniably masterful.

One thing to note is these songs seem to serve more or less as soundtrack pieces, as they don’t have vocals in any form. This isn’t an issue for me as I can take or leave vocals a lot of times in music, and in this case there is so much going in to each track musically, I don’t feel that it takes anything away from the overall package. It should also be noted aside from some hired guns, on guitars, drums, etc. That all the music is written and arranged by Antti and one listen shows that this is no small undertaking. The man is an absolute genius in his craft, and seems to execute his vision aptly.

To classify the type of music presented here I could say Power Metal or Symphonic metal with tinges of folk, some passages evoking some Eluveitie vibes, but with a speed metal foundation setting the pace for most of the eleven tracks. Once again we’re presented with a master class of musicianship. The guitarwork is breakneck neo-classical and almost always displaying lightning fast solo work. Think Yngvie Malmsteen and Herman Li battling at the end of crossroads. This is battle music through and through, Claymore to Face (probably my favorite track here) can easily prove that sentiment.

At an hour and eighteen minutes though, that is a LOT of battle. I can only raze hordes of my enemies astride an ancient war beast so long. Where this crusade of an album shows it’s strengths it doesn’t let down, but there really isn’t much in the way of moments any slower than a mid-paced gallop. As a soundtrack every track seems to compliment an epic fight scene of sorts, but in the few calmer moments I sometimes found myself hoping it might resurface or be expanded upon, as they were really impressive moments and added a lot of flavor beyond the sweeping and hammer ons of the guitar throughout. But still that’s a small gripe and any power metal fan or just metal fans in general, can find a lot to like in these tracks. I know I did.