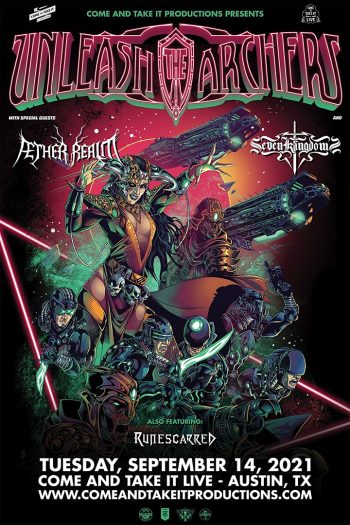 Before I dive into the music, let me give a little praise for the venue. Texas is a pretty big state, and for a student making a day trip halfway across the state during one of his two free days a good venue is a huge plus. Come and Take It, the venue for the Aether Realm show, not only has two bars, billiards (pool) tables with screens to view the concert upstairs, and exceptional (albeit occasionally problematic) acoustics, but the top floor is also incredibly accessible. In the local venues where this reviewer lives one would usually need a special tickets or pass to access areas like that. Additionally, the audio team who played the music between shows adapted to the audience, adding in bass boosts and turning up the volume when the people in the venue were clearly enjoying the songs. And even more interestingly, they tailored the songs to a Power Metal fanbase (most likely because of the headliner Unleash the Archers), playing bands like DragonForce and Blind Guardian instead of playing it safe with standard metal classics. In short, if our European audience is ever in the States and visiting Texas, go to the Come and Take It in Austin, the décor is quintessentially Texan, the atmosphere is good, and it stands out among the venues I’ve been to so far. And with that out of the way onto the music.
Now the primary issue with the entire show is the audio. It is in no ways bad, in fact many people will like that the walls literally shake from the piercing screams of vocalists, and the sound carries well enough smokers might be able to hear the songs from outside (in fact some of the last portion of this review was done in the smoking area due to the acoustics and an oversight with earplugs). However, the issue is because of the acoustics and the (relatively) small venue, listener’s ears will be ringing by the time they realize how loud it is. And consider too the boosted vocals mentioned later in this review and one might begin to think earplugs might in fact be necessary to enjoy the show. Upstairs seemed to be the best place in-house to enjoy the concert. And the crowd sure enjoyed the first act, local band Runescarred.
Runescarred was intense, fast paced, energetic, and a high point even among the titans later in the lineup. The majority of their music lended itself well to moshing, which sadly didn’t happen in full force often in the show. Runescarred did a Paul Stanley style role-call and urged the people from Austin to show those from out of state “how things are done in Texas”. It was high energy and really heavy compared to other bands that play Power Metal with Progressive leanings (think of late Blind Guardian at the speed and intensity of early Blind Guardian). Before the show their merch stand was apart from the others, with no visitors, by the end of it this reviewer saw at least three people upstairs wearing their merch. People were visibly warmed up by the time Seven Kingdoms came on.
It appears based on the crowd-work and the fans’s individual cheering that Sabrina Valentine is somewhat of a sex symbol for her fans, but she does have exceptional skills as a vocalist beyond a charismatic appearance and personality. Her sustained screams were on par with studio versions of much more renowned bands, and at some point they even boosted the frequency to match those absurd sonic frequencies in guitar solos that clip unless you wear earplugs. The rest of the band were in top form too. Cruz and Byrd, the guitarists, exuded a strong stage presence too. And the crowd work was definitely a high point. Following Seven Kingdoms was the band made this review happen, Aether Realm.
Well on the topic of crowd-work, Aether Realm went straight for it from the start (As you will hear in the interview with them soon, their laid-back start to the show won’t come as a surprise). Their opening numbers were their more mellow songs in the vein of “Lean into the Wind”, and “Slave to the Riff”. Now some songs off Tarot and Redneck Vikings From Hell might have similar slow-paced, more fleshed-out songs but the ones off the latter album is somewhat more loaded emotionally. So it was interesting to see how they positioned what is essentially their equivalent of ballads in unorthodox places in the setlist, and their choice to open the show slower than the pace of the previous bands was also a bold one. Though the audience loved it. And in many regards, live shows are just about the fans having fun. And just as Alestorm’s Live in Tillburg review, through a lot of the antics on-stage and the actions of the crowd themselves this show was a reminder of how fun Metal shows can be, even with Covid still haunting the music industry like the escaped quarry of last Samhain’s wild hunt. The show picked up soon however, and while I would hesitate to call Aether Realm a fully fledged Folk Metal band nowadays, even in the same vein as Tyr, they embodied that party-loving, high energy, generally laid back spirit Folk Metal is beloved for (and hated for occasionally). But generally, while this reviewer wasn’t the biggest fan of the set-list, the performance was done well, the audience was always ready, and the band had energy and charisma. So at the end of the day, it was just an excellent return for American Metal.
In closing, the Aether Realm did their own thing and still managed to keep the atmosphere lively, the other bands were at their top form too, and once again, for the European readers, remember the Come and Take It. It’s a stand-out venue in Texas. And don’t miss the interview with Jake Jones from Aether Realm.