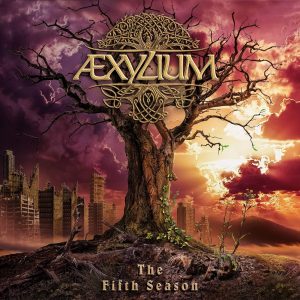 The Italian Folk Metal Band Æxylium out of Varese (Lombardy) will release on the 29.10.2021 their second Full Length Album “The Fifth Season” via Rockshots Records. Already with their Debut Album “Tales From this Land” in 2018 the band was able to put their footprint into the Italian Folk Metal Scene. In 2019 followed a single with an instrumental  folk metal cover of the “Game of Thrones Theme”, which in my opinion was done very well, mainly due the reason that the band has a big selection of traditional instruments as the Violin, Flute, Bouzouki and Mandolin, which are played live.The lyrics are kept on their second record as well in English and are all about the Celtic/Nordic Mythology and Folk Tales. With the help of keyboards and above mentioned folk instruments the eight headed group is creating very epic and orchestral soundscapes, however the metal parts itself vary from Melodic Death Metal to Power Metal up to Symphonic Metal. This becomes clear after the first two songs “The Bridge” and “Mountains”. While the “The Bridge” is driven by harsh guitar riffs including only male heavy growls provided by the lead singer Stefan Merani and guest vocalist Samuele Faulisi (Atlas Pain), you will find on the second track “Mountains” the female guest singer Arianna Bellinaso, who is bringing a kind of “Nightwish/Leaves Eyes touch” to this title. This female guest singer is really an enrichment for this song. On the “Immortal Blood” the tone gets harsher and convinces with great melodies and especially with an very ingoing hook. Until that moment the album really got me. Everything was fine, but actually with the titles “Battle of Telleham” and “Skal” there is coming an unexpected change. The lead vocalist who is in general extremely strong when growling, starts with clean singing and Æxylium does not do them a favor with that. The clean vocals are basically spoiling the songs, as the power and strength of clean singing of the vocalist is just not given. As well the musical approach turns on “Battle of Telleham” into a more Power Metal driven style. “Skal” should be a kind of folk rock ballad, but as mentioned the poor clean vocals are destroying the great musical composition. The short instrumental interlude “An Dhamsa Mor” is again showing that all in the band are full blood musicians and very dedicated. It is a pleasure to hear the interplay of all those great folk metal instruments. Basically the song “Yggdrasil” continues, where “Immortal Blood” stopped, you get here one of the stronger tracks of the album, just to get the same problem with the clean vocals back on “Vinland”. The album is really an up and down, as with the “Fifth Season” you get again a perfect song including the guest appearance of Arianna Bellinaso with clean female vocals inter-playing with the strong growls of Stefan Merani. In my opinion the strongest track on the record. The title “Spirit of the North” falls back into the category “Power Metal song with clean vocals”, reminding me a little bit on “Elvenking”. The closing instrumental track “On the Cliffs Edge” shows once again the big talent of the traditional instrumentalists.Somehow it is very difficult to me to score this album, as there is no real musical direction given on the album. The only thing what all titles have in common is that all must be considered as Folk Metal. The efforts which the band takes to create epic folky soundscapes are amazing and generally there is big “thumb up” in this regard. What is a little bit annoying is that the band either does not want to find their style or the band plays on purpose with a lot of genres. For me definitely the strength of this band and as well of this album lays in the kind of  “Melodic Death Folk Metal”.