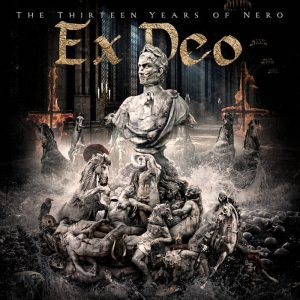 The Roman Folk/Symphonic Death Metal band Ex Deo just released their 4th full lenght album “The Thirteen Years of Nero” and is presenting us the next masterpiece full of epic sounds in form of a concept album all around Nero Claudius Caesar Augustus Germanicus. A sound recording of a movie is starting the first title “The Fall of Claudius” in order to kick off in mid tempo driven heavy guitar riffs, growls and the unique orchestralic sound. With this kind of into you are already getting drawn into the maelstrom of musical symphonic soundscapes and the next song “Imperator” continues to bind you with its perfection between story telling and musical arrangements. In the next song “The Head of the Snake” Ex Deo goes as well into detail, strings and choirs working out the theme of Nero’s struggles with his mother “Agrippina mother of snakes and fire”. On “Boudicca (Queen of the Iceni )” the band gets support from Brittney Slayes (Unleash the Archers) taking over the role of Boudicca, who was a British Army leader, who fought against the occupation of Brittania by the Romans. With female growls, clear singing or just speech Brittney Slayes supports in full the lyrics and concept of this title. “Brittania: 9th at Camulodonum” is thematically following the resistance and battles between the Romans and the Celtic Tribes. The listener is placed directly into the commands of the battles, while the drums, the guitar riffs, the growls of lead singer Maurizio Iacono make sure that our heads do not stop banging. A small instrumental interlude “The trail of the gods” gives us a small break before the little slower, more doomy “The Fiddle & The Fire” brings us back into the world of Nero. The mid tempo continues on the “Son of the Deified”, the sound of marching troops and trumpets are paving the way to the coming end of the Emperor Nero, while he settles with the Senat lyrically in a very bloody way 🙂 The next song “What Artist Dies in Me…” is again speeding up the tempo a bit, but keeping the heaviness of the general sound Ex Deo is creating over the whole record. The Death of Nero has come and a last time Nero feels misunderstood “All the glory in the world cannot be enough to understand my philosophy”. With last song “The revolt of Galba” the new emporer Galba has come and is closing this concept album. I am following Ex Deo since their first record Romulus and what has started as a side project of Kataklysm’s Maurizio Iacono in 2009 has developed to one of the best epic/orchestralic/symphonic Death Metal bands I know. In my opinion with “The Thirteen Years of Nero” Ex Deo reached the top level of its unique genre and there is simply nothing you can to better. There are no gap fillers in this album and such tracks as Imperator or “What Artist Dies in Me…” have the strength to become the next “I, Caligvla” or “The Rise of Hanibal”.