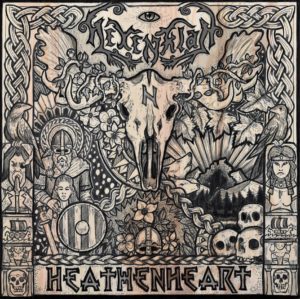 In a nutshell: A promising band and a good album, held back by an average production and lack of focus

Hexenclad is a Folk/Black Metal band from Ontario, Canada founded around 2014. They released their first album “Spirit of the Stone” in 2017 and recently their second album “Heathenheart”.
The main line-up consists of vocals, two guitars, bass and drums. Additionally, a tiny sprinkle of keyboard is faintly audible on some tracks and a clarinet on the last track. All of the bands members had years of experiences in other bands, with the guitarist also playing in Sig:Ar:Tyr.
The band is inspired by Scandinavian Pagan Metal bands like early Moonsorrow, Einherjer, Primordial, Ensiferum, Windir and many others, while their own Black/Folk Metal compositions do not imitate the style of any particular band too closely. In my case the closest thing were the acoustic folk parts that reminded me of Finntrolls acoustic album “Visor om Slutet”.
The album contains mostly a mix of fast and midtempo Black Metal songs with folky melodies as well as some acoustic tracks – and very short experimental visits to other metal genres within those songs. Sometimes a bit doomy sometimes with a tiny hint of Gothic? But the focus of Hexenklad is definitely Black/Folk Metal.

I hope you can excuse the well-worn and maybe a bit exaggerated phrase:
“The album feels like a raw diamond – waiting to be grinded to show its full potential.”
­In practice this album IS full of potential: There is no shortage of musicality and competence, many fresh ideas, a decent amount of variety and an overarching “organic” feel.
BUT on the other hand, “Heathenheart” it is still a mixed bag. While some songs are truly great (mostly the first half) others would not be missed if left out or changed dramatically (most of the second half).

The Bad: The production & too much material not condensed enough

One of the reasons is an inconsistency in technical production quality. Some songs are clearly louder than others, the levels of guitar/drums/vocals are a bit different on every song and the production (recording, mix & master) is all in all just not on the professional level it could have been. Don`t get me wrong: The sound would be sufficient for the average true Black Metal album but compared to established bands of the Pagan/Folk Metal genre (Moonsorrow, Einherjer, Ensiferum etc.) there is still plenty of room for improvement for Hexenklad.
The biggest flaw is the guitars sounding just not big enough and the drums missing impact and punch (but at least the band made the effort to record real drums, which is always nice). The vocals are quite nice though.
My impression is that the album was recorded over the course of many months by the band itself instead of within a few weeks by an external unbiased producer in a professional studio. Maybe Hexenclad finished one song, a few months later another one and in the end, they put all of them together to create the album?
This is pure speculation and probably wrong, but the album sounds like a collage of very different material loosely put together – not like a solid condensed and properly refined piece with a clear vision. After the promising first half of the album starts to ripple away. Some of the songs feel “stretched. Like butter scraped over too much bread.” The old phrase of “perfection is achieved not when there is nothing left to add, but when there is nothing left to take away.” also comes to mind. Less is more sometimes.

Fans of melodic Pagan/Folk/Black Metal could definitely give this album a try. Especially if you are okay with a somewhat raw production.
While I thoroughly criticised the technical quality of the mix, I did this out of appreciation for the potential of the musical compositions. The production being the weakest link, while many of the melodies are catchy and the album simply has a very inspiring atmosphere and feel. Especially the first half of the album is fun to discover.
All in all, the positive impressions prevail. I think the band is on to something and I am really look forward to their next release – hopefully this time with a truly professional level of production.

Listening to “Heathenheart” feels like a walk through a long-forgotten garden. You could admire the raw and lush green beauty, but some of the plants clearly overgrew the others. While there is a lot to discover, strolling through the garden, one thought repeatedly comes to your mind: “If only a professional gardener had taken the time to trim down the wild. A greater picture would become visible, a more complete and balanced work of art that is lying obscured within the abundance of other plant material.
Still and interesting garden though.”

Tracks to check out: