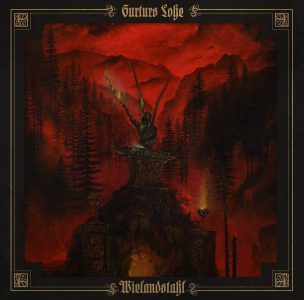 In a nutshell: a typicalGerman Pagan Metal album release that fluctuates between “solid, not too bad and: nothing to write home about”

Grain of Salt Warning: Do you love the subgenre of “German Pagan Metal”? You think it is the bee’s knees? – Then you might consider taking this review with a grain of salt. Taste is a very subjective thing …

Surturs Lohe is a Pagan Metal band from Meinigen in Thuringia, Germany. Founded in 1996 they celebrate their 25th anniversary with “Wielandstahl”.
The band sounds A LOT like what I consider the “typical German Pagan Metal” sound. Listening to “Wielandstahl” I felt reminded of bands like: Taunusheim, XYV Dark Centuries, Fimbulvet, Menhir, Gernotshagen, Obscurity and others. Maybe also a bit of Helrunar, Thorondir, Thrudvangar …
The main line-up consists of two guitars, bass, vocals (mostly growled/mid-screamed), drums and sparingly female vocals, clean male vocals keyboard, and recorder.
The album consists mostly of midtempo Pagan Metal songs in a 140-165 bpm range (refreshing exception is the 180 bpm fast “lahmende schmied”), as well as lots of acoustic guitar parts that maybe remind you of Ulvers Kveldssanger, or of german boyscouts singing at the campfire, – depending on your personal biography.

The band initially had bad luck when they signed their first record deal – with the label Christhunt Productions. Nowadays the label is infamous for releasing mainly NSBM bands, but back in 2000 Surturs Lohe was only the third band that got signed. None of the initial bands had connections to the political far right, but in the following years most of the new signed bands had – many with hilariously blunt and obvious Nazi adoring album covers and Nazi fan fiction lyrics.
Surturs Lohe stated that they never had any interest in right-wing ideology and that they tried their best to leave the label, but they had signed a waterproof contract in 2000 that legally obliged them to stay on the label for three releases – come hell or high water.
This burden from the past has led to a lot of pigeonholing of the band over the years but luckily those times are over by now. Since 2016 Surturs Lohe are signed by “Einheit Productions” (a normal german metal label).

My Impression: Okay – but nothing too spectacular.

The production is overall “okay”, the compositions are not bad, the instrumentalists know what they are doing, and this album is so far the best sounding release of the band yet. The subtle female vocals (especially on “Mimes Reigen”) are nice and something out of the ordinary, reminding me of old Siebenbürgen. The fast double bass parts in “der lahmende Schmied” made my head nod rhythmically approving. Really not bad.
BUT while I am sure the album will find a lot of (Pagan Metal) fans and rightfully so, the album left me personally – a bit bored.
I have listened to the release many times. My listening reaction could be summarized by: *shrug* “This is okay I guess?”
The sounds entered my brain and left it again but mostly they didn’t stimulate a strong reaction. While there was no clear thing that I disliked (maybe the spoken lyrics), at the same time nothing affected me positive on a deeper level. No melodies really stuck with me for a long time after listening …

It is quite hard to pin down what exactly is missing to turn this album into a work to remember for me. The mix still leaves a bit to be desired though. The single instruments don’t form a cohesive massive unit in this mix, compared to other mainstream metal mixes. The guitars definitely could use a bit more punch/distortion/ or maybe a boost pedal, while the drums would profit from a more human and organic sound.
Another impression I had was that the band (and to a lesser degree the mixer) could improve their work on the “arc of suspense” within the songs. More proper shifts in dynamic, like a reduction in arrangement, dynamics, or colour in one part – to emphasise the epicenes and impact of another one. In many songs I had difficulties to emotionally distinguish verse from chorus. The “intensity level” of drums, guitar and vocals were just too similar throughout the song leading to a slightly bored feeling.

The album is definitely “okay” but compared to big international releases a bit average, familiar and somewhat predictable. In 54 minutes, I have not heard a lot that was “new to me”. I was missing some unique trait of Surturs Lohe that I haven’t heard before in a similar way by similar bands.
But still: Congratulation to the 25th band anniversary, this is an accomplishment not many bands achieve!

For whom is this release?