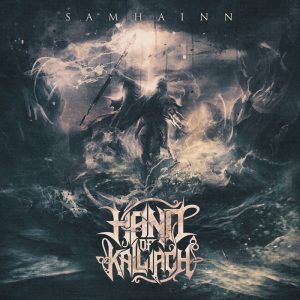 Formed in 2020, Hand of Kalliach (derived from the legend of the Scottish witch god of winter) is a husband and wife duo out of Edinburgh, Scotland.  Husband John Faser taking responsibility for vocals, guitars and drums, while wife Sophie Fraser handles bass and backing vocals. Samhain, appropriately titled for an October release, brings out a more mature soundscape than on their debut EP Shade Beyond (2020). The opening track introduces us to harsh blackened death male vocals, sprinkled with soft female soprano clean vocals from Sophie (like a siren from the North Seas).  The balance between the two vocal styles are reminiscent of bands like Leaves Eyes, however the thematic qualities of the music differ entirely.  In the songs ‘Solas Neònach’ and Òran Na Tein’-éigin  (loosely translated Some Kind of Fire) the Fraser’s build in pounding rhythmic backdrops against folk melodies and catchy tremolos from the guitars. There are several layers going on within most of the songs that seem to put the listener into a trance only to be awoken suddenly by the drums and aggressive guitar riffs. The lyrics revolve around themes of darkness and light. Samhainn is a great sophomore release however there seems to be an overlapping continuity between all the songs on the album.  They have redefined their style in a positive way, now they need to find a way to make it flow better from song to song. Highly recommended for fans of Saor, Autumn Tears, and Amon Amarth.