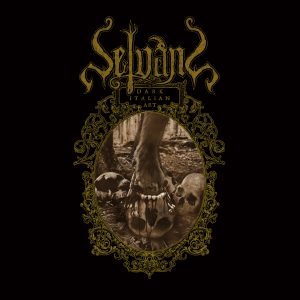 After three years of waiting time since their last Full Length Album “Faunalia”  the Italian Folk/Atmospheric Black Metal Band Selvans will release a new EP called “Dark Italian Art” on the 12.11.2021 via Avantgarde Music. On this EP it is the first time that Selvans is joined by his full live band, who are with him since several years. Selvans understands himself as a being out of the underworld, wandering among the ruins of abandoned villages, from the mountains to the sea, followed by a procession of fauns and other beasts and which is the keeper of dark tales from the historical, magical and folkloric heritage. Most properly the lyrical themes Selvans is dealing with are more or less the only parts which may be connected to any kind of “folk metal”. At the end of the day Selvans is presenting here a quite complex and for me really not easy accessible release, which is creating soundscapes full of horror and absurdity. The band is using beside the typical metal equipment all kinds of additional instruments as example the piano, keyboard and organ in order to underline their music. The EP contains 6 tracks, while 3 of them are covers. The “Introduzione” and “L’Inferno” are covers from the 70ies Roman Symphonic Rock Band Metamorfosi, while the title “The Hanged Balled” is a cover from the Italian Heavy Metal Band Death SS. It is hard for me to charge those covers, as I am not familiar with the original titles, so I rather focus on the three remaining own composed tracks “Verrà Corvo Morto”, ” Iò Pan!” and “L ’Errante”.  “Verrà Corvo Morto” is bascially a very harsh driven black metal track which is using the keyboard/synths to create a kind of scary mood and drag us into a kind of horror movie scenario. Beside that it is something like Avangarde Black Metal the concept and as well the musical underlines of the keyboard remind me very much on the mastermind of horror “King Diamond”. The vocals are of course held in Italian and are varying from deep growling and grunts to nearly clean singing or sayings. “Iò Pan!” is most properly one of the hardest and darkest Black Metal songs I heard for some time. On that one the keyboards or symphonic approach does not play that big role. Just a pure evil dark track, I guess that is what Selvans wanted to aim. The last own composition “L ’Errante” is fully instrumental and could be seen as an Outro.As summary I need to say, that first of all in my opinion Selvans has nothing to do with Folk Metal and surely should be reviewed by a Black Metal Webzine and secondly even if I would need to charge them as a kind of Avantgarde Black Metal Band I simply can not connect to them and in my opinion the kind of King Diamond Black Metal is not working out. For all Black Metal Junkies out there I really can recommend “Iò Pan!” as this track should be heard!