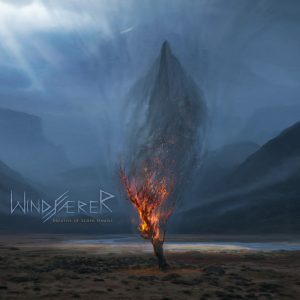 If you’ve been following this page for any amount of time it’s likely you’ve heard of Windfaerer, and if you haven’t you’ve some catching up to do. Seriously go listen to Windfaerer right now then come back… OK now I’m assuming we’re all the same page and your mind is sufficiently blown to continue. Now speaking for myself these guys are somewhat of a sacred cow, they’ve yet to miss a note. Maybe it’s the fact they’re American and craft a brand of black metal this genuine. Once again this is my view but here on this side of the pond you don’t get a lot of acts that don’t feel derivative or gimmicky, especially on the folk metal side of things. With Windfaerer you get a masterclass in a music so dark and brooding yet beautiful all at once it’s hard to bunch them with many contemporaries. Alma was such a scorching piece of work I still have it in rotation. This year they return with Breath of The Elder Dawn and while the fundaments remain largely the same, we see a somewhat new Windfaerer as well.

This is easily the most of I’ve listened to a release before writing my thoughts on it, and I feel it was right. I could spend another week and probably find another layer here. Recording-wise this is the clearest they’ve ever sounded and every element musically gets to shine. Windfaerer’s always packed a lot into their sound but some of their outside influences are really mixing into the black metal cauldron well. From the hackle rising opening of Oxala the guitar riffs have a focused thrashy feel to them. The vocals, a sound of pure torture, just the way I like them. It’s not often I find myself eight minutes into a song and realizing it’s and realizing it’s over only because the band cleverly transition directly into the the next work. It’s one of many new tricks we see employed with the recording here, and a really nice touch in my opinion.

As I mentioned before though, where this remains recognizably Windfaerer there does seem to carry a noticeable softness throughout the songs in Breath of The Elder Dawns. I’d be lying if the elitist in me didn’t pick up on things like shoegaze type riffs, and clean singing intermittently. With the maturity of the songwriting we see a lot of interesting new elements but at the same time I feel this makes the work as a whole more accessible. This is by no way a detraction, I feel this new direction isn’t exactly a drastic turn musically and brings a lot of freshness to the songs. Things like the bagpipe in the opening of Starcrossed feel like an expert flourish rather than a “folky” throw in and adds a new layer of somber to the already leagues deep ocean that is Windfaerers established sound. I’d still be hard put to come up with a band they sound like, it’s a band you really just have to hear for yourself if you’re at all a fan of black and folk metal, and Breath of the Elder Dawn brings a lot of fresh ideas their already pedigreed catalogue.