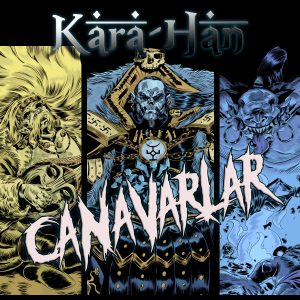 My favorite thing about folk metal by far is the inclusivity. Whatever corner of the world you’re from there’s a guarantee, there is room for you here. Bring your instruments , your native tongue, and your history put it into a song and we are going to eat it up (if it’s good). We’ve seen it with the Mongol metal when Tengger Calvary and The Hu came along and now we see a new player enter the field with Kara Han. When I’d first read that Kara Han would be tackling subjects from their native Turkey, speaking on the Ottomon Empire I was no less intrigued.

While Canavarlar doesn’t tackle any Turkish history in a typical sense it does tackle some mythos in the form of monsters, which is the namesake of the album. From a musical standpoint there’s not a ton to digest here, seven songs over the course of 25 minutes one of which is a rehash from the their last album “Avrat Metal!”. The music itself itself is pretty meat and potatoes metal style, lots of heavy riffs and solos with dashes of acoustic flair that employ their ethnic instruments like dombira. Each track tackles the subject of a different Turkish monster or old folk horror story. Blending storytelling with an light industrial almost Nu Metal style. I use the Nu metal term lightly as there are no hip hop elements here it’s just the genre I’d liken it to most. The biggest standouts to me being Erlik Han and the rehash of Mankurt Orkestral which takes a previously acoustic song and injects new life into, with as the title implies orchestral elements.

All these elements mixed with a vocal style that really makes reminiscent of Litvintroll and there’s actually quite a lot to take in from the twenty minutes or so of new music. I definitely love the idea of more areas of the world joining the folk metal fray. My only gripe is there isn’t a whole lot to break down here, but if you’re a fan of mid-paced, thrashy metal with some industrial undertones this could be a good listen for you.