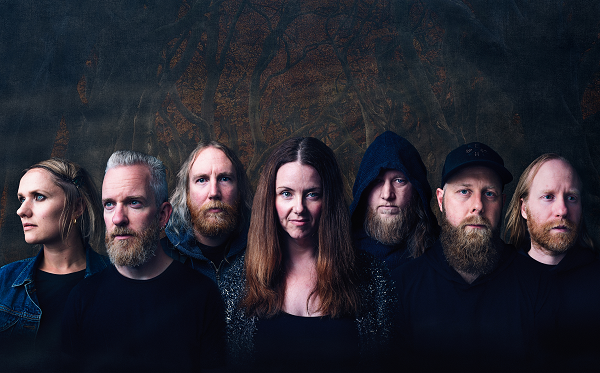 Dark Essence Records have inked a deal with Folk Prog Rockers, Lumsk, a band that describes itself as:

A seven headed “troll” that combines traditional or traditional-inspired elements from Norwegian folklore and poetry with progressive rock and metal.

Formed in 1999 In Trondheim, Norway, Lumsk set out to explore the concept of regional folk traditions, as did many European heavy metal bands towards the end of the 20th Century.  So great, in fact, was that interest, and its ensuing popularity amongst fans,  that, by the first decade of the new Millennium, it had burgeoned into a significant sub-genre all of its own.

You could, in fact, go as far as to say that Lumsk was probably one of the first bands that had been “built for folk” from the ground up,  with heavy guitars, keyboard and organs, violins, session horns and female vocals.

Lumsk’s debut album “Åsmund Frægdegjævar” appeared  in 2003 and was based on the saga of Åsmund Frægdegjævar, who traveled from Ireland to save the princess from trolls.  A year later In 2004 Lumsk  began  a collaboration with the author Birger Sivertsen, an expert on Norwegian folklore and sagas, which led to the release of 2005’s album “Troll” whose were lyrics based on Nordic mythology.   The band’s third album, 2007’s “Det Vilde Kor”,  this time featured  lyrics by Norwegian author, and holder of a Nobel Prize in Literature,  Knut Hamsun.

The band’s fourth full-length album has been a while in the making, with Lumsk entering the studio as early as 2010 to begin work on “Fremmede Toner”, a collection of poems by Norwegian  author Andre Bjerke. After a series of setbacks and delays,  which has served to make the album even more anticipated than before, work on “Fremmede Toner” is well underway, and is scheduled for release on Dark Essence Records in 2022, on a date as yet to be confirmed.