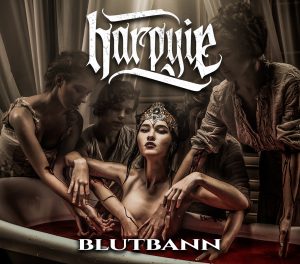 It’s hardly a half year ago German Folk-Metaller of Harpyie released their coveralbum ‘Minnewar’. And already the band has a new album prepared. It will be an even more colorful album, the title will be ‘Blutbahn’.
Here is the new single, taken of the upcoming album, ‘Nachtfalter feat. ASP’.

With this new album the band will once again explore the dark themes. 12 Tracks about vampires, murder and ghosts. It’ about love, death and fear, but about keeping yourself together and conquering your own demons too.

The band will sound like we’re used too from their latest albums, but this time it will suite the theme more, so expect a angrier and more aggressive sound. The release will be 28th January.