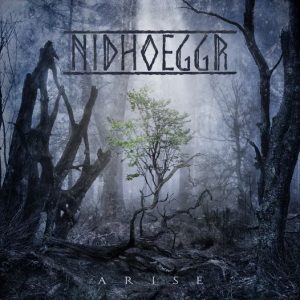 In Norse mythology, Nidhoeggr is a dragon/serpent who gnaws at a root of the world tree, Yggdrasi. “Arise” is the second outing for these Swiss Folk/Death metal merchants who create an atmosphere of their own. Formed in 2009, Nidhoeggr has released a series of singles before their debut CD “Nach der Schlacht” was released in 2015. Again, several more singles released over the last six years and now we have “Arise” as the follow up album. We see a continuation of Melodic Black/Viking/Death Metal with Folk instruments and melodies incorporated. Some of the tracks are reminiscent of early Fintroll songs, others have a Turasis vibe to them with battle metal style foundations, harsh and clean vocal swapping, but not really achieving that “epic” crescendo or sound to take the listener over the top. Most of the songs are representative of this and come across flat, not really achieving the height that they should. My personal favorite thus far is the title track “Arise”. I won’t deny, Nidhoeggr musicianship is solid, each of the six know how to play their instruments well. They weave in piano, accordion, harpsichord and even pipe organ well into their material when it needs to be there. I think they are off to a great start with this addition to their discography, but need to work on overall arrangements and epic hooks or chorus. This album is perfect for fans of Moonsorrow, Thyrfing and Ensiferum.
Fun Fact: ENSIFERUM launched a competition for musicians and Nidhoeggr managed to gain first place with the song “Swordbearer”.