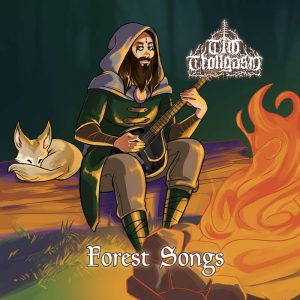 The one man band Tim Trollgasm out of Dubbo, New South Wales (Australia) released on the 19.09.2021 his Debut EP “Forest Songs”. The multi-instrumentalist artist behind this band Tim Read seems to be a full blood musician participating in a lot of other bands of different genres as Bukkake Bandito (Goregrind), Drakkarus (Folk Metal), Festering Utopia (Brutal Death Metal), Rannoch Moor (Blackened Folk Metal) and some others. It is just interesting to see that of course he was also a member of Trollgasm (Folk/Viking/Black Metal), which split up in 2016 and with Tim Trollgasm it seems that Tim Read is continuing this project by himself. Otherwise there is not so much to find out about this “new” band. So let’s come straight to the EP “Forest Songs”, which contains one Intro “Enchantments and Auras” and four songs with a playing time of totally 15 minutes. After an acoustic intro with a lot of traditional folk instruments involved the EP is kicking off with the track “Tales of Weald” and it became quite clear for me from the very beginning that Tim Trollgasm is able to write some good music, but unfortunately the poor sound quality and production is again killing all this efforts. This basically counts of course as well for the following songs “Spellcaster’s light”, “The Wellspring” and the “Tavern Song”. The musical genre I would describe as pure “Folk Metal” and the talent of Tim Read to play all this different folk instruments by himself is really outstanding and should be valued. The vocals reach from growling to clear singing. The poor mastering of the songs (sound, production, editing) is the biggest issue of this release, as the music is coming without any power and simply leads to a lack of pleasure during listening to this EP.