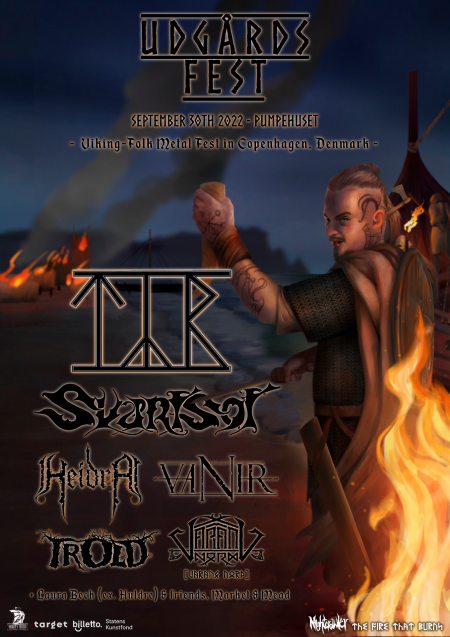 UDGÅRDSFEST in Copenhagen, Denmark, will be held on September 30th 2022 and is now ready with the program for 2022. At the top, we will find the Faroese viking metal heroes TÝR!

When UDGÅRDSFEST returns in 2022, it will be with both strong Danish and foreign names in the folk/viking metal scene!

UDGÅRDSFEST 2022, will we once again pay tribute to Nordic culture with everything that belongs to music and Nordic art.

In both 2019 and 2021, the venue Pumpehuset was decorated with beautiful and style-creating Nordic art. There was mead on the taps. Not to forget the wonderful folk musicians who set the mood both in Byhaven and inside Pumpehuset before, between and after the concerts.

We have gathered the best of what exists of Danish bands within viking / folk metal (all ready with new albums 2022!) together with Varang Nord (winners of the Wacken Metal Battle final 2019) from Latvia and TÝR from the Faroe Islands!

“Getting TÝR at the top of the program for 2022 makes so much sense. They are one of the best names on the international viking metal scene and have toured the world. An absolute must for a folk/viking metal event like ours!
I am also happy to welcome Varang Nord to Denmark for the first time. They come all the way from Latvia – just to play this show. And you can rejoice. I saw them winning the final at the big Wacken Metal Battle in 2019 and ever since I have wanted them to Denmark. Hope to see a lot of folk/viking metal fans in Denmark next year!​ “- Søren Weiss, spokesman

TÝR (FO)
They really do not need an introduction. Every folk/viking metal fan must know this band! With classic folk hymns such as “Ramund Him Unge”, “Hold The Heathen Hammer High” and “Sinklars Visa” this will be a party to remember.​ Classic melodic viking metal from the Faroese viking metal heroes in TÝR.​

SVARTSOT (DK)
It’s time to finally welcome Svartsot to UDGÅRDSFEST. They are the kings of Danish folk metal and they have been that since 2005! Therefore, it is a great pleasure to announce this band right now, where they have just announced the release of their new album “KUMBL” for February 2022.​

VANIR (DK)
UDGÅRDSFEST’s very own household name? Something might well indicate that. Vanir has been invited back to UDGÅRDSFEST IN 2022. This time with a brand new album to be released in spring 2022. With a brand new album, we naturally have to invite the Danish Viking metallers back to the stage!

HEIDRA (DK)
Danish viking/power metal! The band that since its formation in 2006 has enriched us with the EP “Sworn to Vengeance” from 2012 and the two full-lengths “Awaiting Dawn” from 2014 and “The Blackening Tide” from 2018. They for sure know how to make an epic and melodic viking metal show! The band has toured Europe sparsely with both Ensiferum and Fleshgod Apocalypse and has recently just returned from a major Europe tour with Omnium Gatherum and Hamferd. New album coming out in 2022!

VARANG NORD (LV)
They blew everything and everyone backwards in 2019 when they won the grand finale at the Wacken Metal Battle at Wacken. Now the band from Latvia finally comes to Denmark to show how dance-friendly folk metal from Latvia must sound like!​

TROLL (DK)
The troll is out! And a new acquaintance on the Danish folk metal scene is a reality! Troll plays folk metal with a mischievous smile, which is guaranteed to kick the party off directly from the large, dark Danish forests. Trolls have their roots firmly planted in the Nordic soil, where inspiration is taken from a wealth of fairy tales and mythologies. Once the trolls are on stage, you can be sure that the party will start and the good mood will be kicked off.

In addition to the announced names, the audience can look forward to a new feature with Laura Bech (ex. Huldre) and her team of wonderful folk musicians. Not to forget lots of mead and Nordic art and culture for UDGÅRDSFEST 2022

UDGÅRDSFEST 2022 will be held in Pumpehuset, Copenhagen, Denmark September 30th!