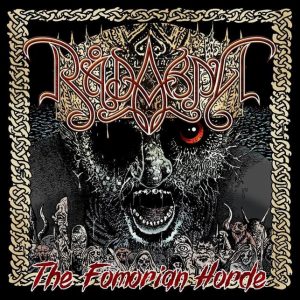 1. Rådarna – ‘The Formorian Horde’
With a Total of 36 points a clear winner. The best album according to two voting teammembers and second best for another, clearly the best debut of this year. Congratulations!!!
“Somehow a crazy mix of everything and quite unique. Especially the interplay between the growls,the punky singalongs and clear chants I never experienced in any other band and the implementation of the same is really brilliant. The use of synths and the accordion underlines each songs and creates more atmospheric folky soundscapes.” “Rådarna is finding a very nice balance between folk metal, pirate metal and celtic punk, which makes this Debut certainly one of the most innovative records in the year 2021.”

2. Vansind – ‘MXIII’
With 32 points Vansind earned their position as runner up very well. Voted as the best once and received very high ratings from the others.
Juergen comments: “Overall it is to say that all members of Vansind understand their craft and are professional musicans. The lyrics are kept in Danish and are inviting you to a journey back into the time of the “Vikings”. Maybe nothing new, but very well done. The only downside of the EP is that it is coming with three songs and a playing of 16 minutes quite short. After listening to this release over and over again at the end it simple leaves a taste for more. I am quite sure that Vansind will go its way and will become soon a constant part of the Danish Folk/Viking Metal scene. In the end MXIII is a very solid release which simply comes too short.”

3. Pagan Forest – ‘Bogu’
Not a new band, in fact it’s remarkable they released a first full length after 25 years, but nonetheless they did this well. With 26 points it’s clearly the start of a top 3. Chosen best and second best, but very little point from the other voters an album to discuss.
Jeff: “The black metal comes ice cold, reminding me partly on the beginning of it’s genre, very harsh and raw. The vocals mainly consist of gowls in the black metal parts with some exceptions on the title track “Bogu”, in which some clear male singing/shouts are added to a more doomy melodic start in giving the track more atmosphere till the black metal part take over again. All together the album continues with a mix of raw pagan black metal with some doomy and folk influences. Personally I like the approach of bringing in some innovation into the pagan back metal structure, especially with the Drewno singers, which are really giving the whole compositions a folky and mystical touch and are for sure a biggest enrichment of this album.”

4/5. Nemoreus – ‘Arnea’
Today we announce the second album with 21 points. Austria’s Nemoreus with their first full length ‘Arnea’. Two voting members thought it should be on the 3rd place. Just like their Hand of Kalliach it’ probably not an album for the ‘masses’. They both received lots of points from some members and very little from others. Personally, this makes an band or album more interesting to me.
Jeff wrote: “My first impression is Korpiklaani inspired folk metal with English lyrics (Bonus!) with some German sprinkled in and folk instrumentation including fiddle with flute and bouzouki listed and obvious at times. I would say that on some level maybe even a little bit of my friends in Sekengard or Isenmor at times came to mind. For the most part, and maybe because the accessibility with the English lyrics and clean style vocals, this is fairly mainstream and I may lean more towards folk hard rock as opposed to metal.”

4/5. Hand of Kalliach – ‘Samhainn’
We take a little leap in points to find two bands which ended up with 21 points. Remarkable fact: one of the voting members is of the opinion this is the second best debut this year. Well done by this Scottish couple, on the doorstep of the top 3.
Matthew: “The balance between the two vocal styles are reminiscent of bands like Leaves Eyes, however the thematic qualities of the music differ entirely.  In the songs ‘Solas Neònach’ and Òran Na Tein’-éigin  (loosely translated Some Kind of Fire) the Fraser’s build in pounding rhythmic backdrops against folk melodies and catchy tremolos from the guitars. There are several layers going on within most of the songs that seem to put the listener into a trance only to be awoken suddenly by the drums and aggressive guitar riffs. The lyrics revolve around themes of darkness and light.”

6. Folkrim – ‘Tales of Tumult’
The debut EP of Folkrim received 17 points.
Juergen said: “Musically all songs are very well produced and presenting a very nice mix of Folk Metal, Humppa-Metal and Pirate Metal. As small little weakness I see the song “Nightfall”, which should​ come​ as a “deeper, more mature”and​ slower song​ of the album, but it does not work out at all.However at the end it is to say that I really enjoyed listining to this album and I strongly believe that the concept of “Folkrim” (even not new) is working out and you receive a very solid debut. If Folkrim is able to bring those drinking songs with the same quality as on the album​ live on stage, then I am sure that they will be responsible for the one or other hangover of their fans. “

7. Sieta – ‘Novgorod’
With 16 points this Russian project managed to claim this spot in the list.
Jeff wrote: “There is a nice blend of styles and I believe that is to be expected from a new project trying to find its signature sound. There are some up-tempo tracks mixed in with some mid-paced ones and I think that is where you hear some of the other projects they are involved with cross into Sieta. The folk instrumentation (whistle/flute and some stringed instruments it sounds to me) and keys feel like the differentiating factor here giving it that more pagan vibe.”

8. The Chant of Trees – ‘ The Chant of Trees’
The second album with 15 points is ‘The Chant of the Trees’ the self-entitled debut-album of The Chant of Trees. This album ends up a little bit higher because there’s even one teammember who thinks this is the second best debut album of this year. It was the first debut album we recieved. The Chants of the Trees is a new project coming out of France and that they describe their style as Meditative Folk Metal. It is really astonishing how the band is able to create a perfect fusion of relaxing meditative music and metal. Juergen: “I was immedialtey convinced by the great atmosphere which is created with a mix of nature sounds out of the forests and the sea ( i.e. birds singing, whisperings of a creek, sea waves), in-depth going accoustic guitars, flutes, pipes, clear female/male spoken words and singing along the meditative music mixed with some metal elements. The metal parts are implemented very wisely and are coming party very slow, sometimes in mid tempo, but always perfectly fitting into the concept and atmosphere. A brilliant project just to lay back, relax and let the music take you away.

9. Oscenrad – ‘Beyond the Fells’
Two band received 15 points with their debut-album. The one man band​ “Oscenrad” is with “Beyond the Falls” one of them. Juergen: “Traditional Folk instruments do not play any big role here, very limited you can hear some underlaying nearly symphonic arrangements, which should underline the epicness of the tracks. The vocals range from growls to clean sayings or as well chants used in the background. Lyrically there is basically nothing really new, every track is somehow connected to the topics mentioned, if it is about battles, invasions, runes or​ the praising of Woden.”

10. Sorcières – ‘Empoisonné’
The French black/folk metal band Sorcières out of Lille received 13 points for their first full length album “Empoisonné”. Juergen: “The lyrical themes are all about Nature, Darkness and Folkore.”… ” I personally like the approach of Sorcières and to a certain extend they are really delivering some kind of new Folk Metal Style combined with Atmospheric and Epic Black Metal. I like the way how they build up the soundscapes of their songs, especially on “L’auberge des corps perdus”, “Empoisonné” or “Ordalie”, which count to my favorites on this piece. The attempt of this band is great and they delivered a very strong debut album and it is to hope that we will hear more from them in future.”

11. Asgaror – ‘Mi Propia Magia’
The debut-EP of Asgaror belongs in this list for sure. It received a total of 8 points from 3 members.
“I would say that Asgaror is on the right track, I personally liked the very much the folk driven tracks “Mi Propia Magia” and “En el mas ella” and also need to underline that the vocal skills from Criss Mesa are really outstanding over the whole album. There is a lot of potential in Asgaror and with the release of this EP they did the first step into the right direction.” (Juergen)

This year only 4 members could find the time to rate all the albums. This means the albums can get a maximum rating of 40 points. Last year our opinions were close and there was an absolute winner with Isenmor’s ‘ Shieldbrother’. What will it be this year??