↓
Home→news→Empyrium made the Best Album 2021 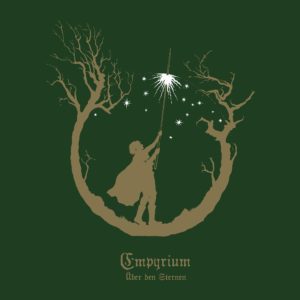 1. Empyrium – ‘Über den Sternen’
Maybe not the best album according to our votin members, but chosen second best by no less the three of them. ‘Über den Sternen’ reached a total of 34 points. Great efford of these Germans.
It was Juergen again who wrote the following about this album: “The complexity of their compositions simply do not allow to put them in any genre. Empyrium is unique and all attempts to classify their music will fail. As a small remark to add is that the label of Empyrium Prophecy Productions and its foundation is going back to the debut of the band “A Wintersunset…” and is celebrating in 2021 their 25th anniversary. With this new release Prophecy has a further reason to celebrate. Happy Anniversary! For me there is no other choice to honour “Über den Sternen” with the full score and to thank Empyrium for their great efforts in creating such a masterpiece.”
Congratulations Empyrium with this great album!

2. Einherjer – ‘North Star’
The number 2 is a decent runner-up, with 31 points they found themselves in a serious battle for this title. Again it is chosen the best album by one of us and second best by another. Great efford by einherjer.
Jano comments: “Besides for one or two tracks that maybe lapse into unfamiliar territory in terms of riffing and production, this is an excellent Einherjer release, and a good release altogether. One may thumb their nose at the production values but Einherjer have earned the right to not be constrained by traditional Black Metal album conventions. Don’t miss North Star, there’s endless nuance for the boffins, and endless beats for the musicians.”

3. Wolfchant – ‘Omega : Bestia’
After seven different countries we have the second German band. With 24 out of 50 points Wolfchant achieved to claim the third place in our ‘Best Album 2021’ list.
Juergen said: “the album shows no weakness at all. It seems that sometimes a break is necessary for a band in order to come back stronger as before. “Omega:Bestia” counts for me to one of the best albums of Wolchant and without no doubt this release proves that the popularity of the band (especially in Germany) is more then justified. For sure one of the best releases so far out of Germany this year and a candidate for our Top 10 Albums of 2021.”.

4. Dalriada – ‘Őszelő’
The no. 4 on our list are the Hungarian folk-metallers of Dalriada. The band gained 23 points too, but they have the advantage to be chosen the best album by one of us.
Juergen: “The album is including 10 tracks and you will find no fillers on this release. Every track stands out for itself and for me Dalriada is internationally seen one of the most underrated bands in this business and at least for myself should play in the same league as Korplikaani. Furthermore “Öszelö” is the most mature album of Dalriada so far and is as well showing the big varity of the band. I sincerly thank Dalriada for their great dedication to the genre and I am looking forward to the next 15 years of their history! Köszönöm a nagyszerü zenet!”.

5. Korpiklaani – ‘Jylhä’
We’re moving up with one more point for Korpiklaani. 23 Points in total for their album ‘Jylhä’.
Juergen comments: “In fact it must be very hard for a band like Korpiklaani to always reinvent yourself without losing your roots and to keep your fan base happy. The band is out there since 2003 (Shaman or Shamaani Duo since 1993 ) and with the number 11 “Jylhä” they proof that exactly this is possible. This 60 minute​ record has no gap fillers, is innovative, is​ bringing new influences into their established Folk “Hummpa” Metal style and moreover is​ never getting boring.The development from their first album “Spirit of​ the Forest” (which is a​ Folk Metal classic) up to today is just astonishing and deserves my full respect.​”

6. Suidakra – ‘Wolfbite’
The German Celtic-metallers of Suidakra ended up on the 6th place in our list of magnificent albums of 2021. They managed to gaan a total of 22 points with their 15th album. And again we are talking about the favoriete album of 2021 for one of the voting members.
Juergen said about this: “For myself there are two aspects, which make this release and SuidAkra such strong.​The first one is that SuidAkrA can always deliver in all kinds of genres they are playing. If it was the accustic album “Cimbric Yarns”, their celtic folk metal classics “Book of Dowth” and​ “Caledonia” or even this more Melodic Death Metal driven album “Wolfbite”. I also need to say that even on this new record itself the band brings a lot of variety into their songs. The second aspect is that SuidAkrA​ really understands to constantly evolve their style​ and with “Wolfbite” the focus clearly lays on more hard driven Metal, which brings up one of the most aggressive albums in their history. Big Congratulations and a big “Thank you!”​ to SuidArkA​ in delivering us such a great, solid and worthy album Nr. 15!​”

7/8. Utmarken – ‘Svåra år’
Just like Ex Deo, Utmarken ended up with 19 0ut of 50 points.
Jeff said abot this album: “The nyckelharpa (keyed fiddle) is still another amazingly underutilized instrument in the genre and has a major impact throughout, but I would say less so on this release than on the previous 2 albums or in his other project Norrsinnt. The tracks here are just more memorable and catchy with riffs and harmonies that will stick in your head. “…”From a reviewer point of view, most of the time you are obligated to listen to albums because you have to…..this album I estimated I have listened to well over 40 times and each time not because I have to but because I want to. What more can I say? This is an absolute classic and has made 2021 much better already because of it.”

7/8. Ex Deo – ‘The Thirteen Years Of Nero’
Two albums ended up wifh 19 points. Ex Deo is with their new album ‘The Thirteen Years Of Nero’ one of them.
Juergen said: “I am following Ex Deo since their first record Romulus and what has started as a side project of Kataklysm’s Maurizio Iacono in 2009 has developed to one of the best epic/orchestralic/symphonic Death Metal bands I know. In my opinion with “The Thirteen Years of Nero” Ex Deo reached the top level of its unique genre and there is simply nothing you can to better. There are no gap fillers in this album and such tracks as Imperator or “What Artist Dies in Me…” have the strength to become the next “I, Caligvla” or “The Rise of Hanibal”. “

9. The Rumjacks – ‘Hestia’
At the 9th place we find another ‘Album of the Year’ for one of our voting members. A Folk-punk album scoring points with three members is new here over at Folk-metal.nl. The Australians gathered a total of 17 points.
Doug comments: “Overall this is a great beginning to a new chapter for the Rumjacks. I hope that this is a much better year for live music since many of these artists really rely on touring and merchandise to support themselves and also we really want to hear them live again. On the other hand many of my favorite bands have recorded really wonderful albums during the pandemic probably because of the time and rest they have all gotten. So the wait is over for this new chapter named Hestia and its a great album so get it while its hot and support the band live. Slainte!”

10. Alestorm – ‘Live in Tilburg’
Is it possible for a live album to be the ‘album of the year’? That’s open for discussion, but one of our voting members was of the opinion that this could be the case. Together with 6 points from an other member makes a total of 16 point for this album.
Jano said (about CD and DVD): “All in all, Live in Tilburg is just fun. It will give both listeners and viewers serious nostalgia for live shows (at least in places where the pandemic still has restrictions on venues), and it is just a reminder of how incredible Metal shows can be. For those looking to buy this album, I can’t recommend either the DVD or the Blu-ray enough. The video is just flat-out entertaining. Compared to other live shows that have been released to video, Alestorm certainly are playing in the big leagues. Through this release, Alestorm have solidified their place as a serious Metal band, though they may joke and play and generally hide it from the world. Good testament to the band, solid release, and generally gives you hope for True Scottish Pirate Metal.”

This year 5 members could find the time to rate all the albums. This means the albums can get a maximum rating of 50 points. This opinions are brought in from The Netherlands, Austria, UK, USA and Brasil. Last year our opinions were close and there was an absolute winner with Finntroll’s ‘Vredesvavd’. But will we be this unanimous this year??