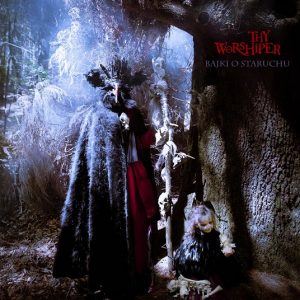 Thy Worshiper is one of those unique bands in the pagan black folk metal scene. The title “Bajki O Staruchu” translates from Polish to “Fairy tales about an old man”, the album comes six years after “Klechdy” and is the fifth studio LP from the band.
Upon translation from Polish to English, the titles and overview of the lyrics depicts a concept focused around an old man and events with a supernatural nature. Common themes revolve around the dichotomy between life and death.
Those into pagan black metal will enjoy the layered growls, whispers which produce a chilling effect. Many of the tracks start off on a slow pace with guitar weaving in followed by bombastic production on the bass and drums, creating an avant-garde atmosphere. The songs are structured with ritualistic tones, folk melodies sprinkled within the female harmonies and tempo changes, thus creating an interesting sound scape which acts as a back drop. The polish lyrics also give an additional layer of eeriness to each track.
My favorite tracks on the album “Baba Yaga”. The song deals with Baba Yaga who in Slavic folklore Baba Yaga is a supernatural being who appears as a deformed or ferocious-looking old woman. It encompasses haunting melodies and seems to be more supernatural lyrically than some of the previous tracks. I also gravitate to the closing track “Mgła” which ends with a very black metal element which then gets stripped to a fading synth.