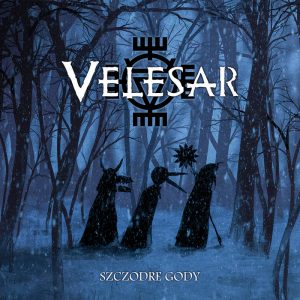 From Poland comes with a lot of power the refreshing and pleasant sound of Velesar’s new album. After a great debut in 2019, the second full-length of their career is released entitled “A bountiful mating“, an album financed with funds raised by a faithful audience hungry for the quality of this band.
The sound of this record is the kind of folk metal that general audiences love, and this work is a good standard-bearer for this genre. Melodies that feel happy and very powerful at the same time and a characteristic voice that invites headbanging, accompanied by instruments with very good tunes where the violin and flute stand out adequately to improve the style and enrich each song. We see some good guitar riffs with excellent interpretation, riffs that appear in the right moments, and evidence of​ the dedicated work in the music composition.
It should be noted that when they use some melodies -as in Swacba- you may remember a famous Russian Folk-Metal band, but immediately Marcin’s voice enters, this thought is forgotten and the song acquires its own identity. Track by track the voice and the backing vocals stand​ out significantly, which must be much more remarkable when performing live, a​ thing that their followers may have already evidenced since they were already playing the songs from this album on their most recent tour.
The production is very good but I think that from there some moments could have been improved, highlighting when an instrument has its moment in the spotlight to prevent the sound of another instrument from generating a distraction when listening to it. However, it’s a very professional work that must be applauded.

It was difficult to choose my favorites as all the songs are very good, but I stick with “Swacba”, “Polny wiatr” and “Radecznica” as top recommendations, but I know that as lovers of the genre you will enjoy the whole album from beginning to end.